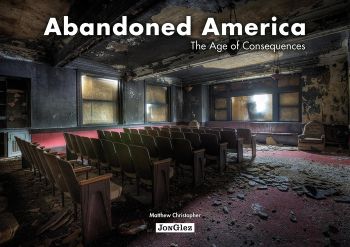 Christopher’s journey to document abandoned sites began a decade ago while researching the decline of the state hospital system. Realizing that words alone could not adequately convey the harsh realities of institutional care, Christopher embarked on a journey to visit and photograph the crumbling state schools and asylums in our midst. Ten years later, Christopher’s focus has broadened to include the ruins of American infrastructure, industry, churches, schools, theaters, hospitals, prisons, resorts and hotels as realized in his first book Abandoned America: The Age of Consequences. From the heartbreaking story of a state school that would become home to one of the country's worst cases of fatal neglect and abuse to the shattered remains of what was once the largest mall in the United States, Christopher’s work asks what leads us to leave places behind and what are the consequences of doing so. Examples of his work can be found at Abandoned America, (http://www.abandonedamerica.us/). His work has gained international attention and he is considered a leading expert on urban blight and the efforts to preserve America’s endangered architectural history.

The presentation will take place between 5:00 and 6:30 and will be held at the Montgomery County-Norristown Public Library located at 1001 Powell Street in Norristown, PA. There is parking available under the building on the side facing Swede Street, and also across the street from the entrance that faces Powell Street. This program is free and open to the public.