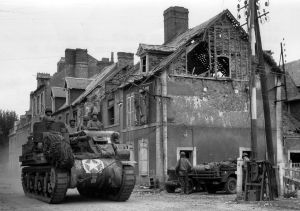 The Historical Society of Montgomery County announces a new series of classes on the history of World War II in Europe!

On the night of June 5/6 the Allied invasion of France began when more than 17,000 Allied airborne troops parachuted behind the German lines in Normandy officially opening a bid to establish a second front on the European continent in World War II. Before the day ended over 156,000 Allied soldiers came ashore along a fifty mile stretch of beaches on the Norman coast. This was only the beginning of what would be eleven months of hard fighting that on May 7, 1945 caused Germany’s surrender and ended World War II in Europe.

Taught by historian Michael Snyder and using lecture supplemented by power point and handouts, this course will cover Overlord (the planning and execution of D-Day), the fighting in hedge rows of Normandy and the breakout, the Falaise Pocket and the pursuit to West Wall, Operation Market Garden, the Battle of the Bulge, the crossing of the Rhine, and the German surrender. The emphasis will be on the military and political operations but will also look at life on the home front in the Schuylkill Valley.

Where: Classes will be held at 1654 DeKalb Street, Norristown, PA, in the Meeting Room of the Historical Society of Montgomery County

Cost: Cost to attend this series is $80 for members of the Historical Society of Montgomery County and $100.00 for non-members.

Contact us at 610-272-0297 or checkout our website at hsmcpa.org for more information or to register for the class.