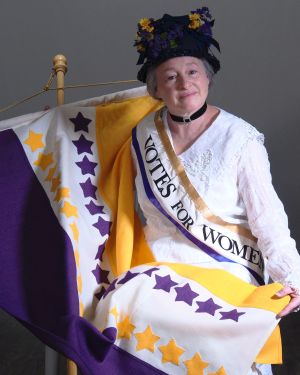 This presentation will be virtual via Zoom!  Please contact us at This email address is being protected from spambots. You need JavaScript enabled to view it. to receive info on how to attend this virtual presentation.

Join us for our next presentation in our Making History Greater Series when Carol Spacht presents Winning the Vote: Celebrating 100 Years of Women’s Suffrage.

Women began their long journey to achieving the power of the ballot when a determined group of activists gathered in 1848 for the first Woman’s Rights Convention at Seneca Falls, NY. Across the nation, suffrage societies undertook the difficult battle to convince a democratic government driven solely by men that “We the People of the United States” included women.

For decades, the primary strategy to win the vote for women focused on passing laws state-by-state. The suffragist movement gained momentum when Alice Paul, a young Quaker intellectual, formed the National Woman’s Party, pushing for a federal amendment to the United States Constitution.

Mrs. Lewis was arrested while carrying protest banners in front of the White House as a “Silent Sentinel”. She served as the spokeswoman during the infamous “Night of Terror” at the Occoquan Workhouse and endured being forcibly fed after hunger-striking. Nothing stopped Mrs. Lewis’ commitment to a woman’s right to vote. Her protest banner quoted President Wilson’s words, “Conquer or Submit”. Dora Lewis would not submit.

Women finally achieved the right to vote in 1920. One hundred years later, we have almost forgotten the struggle and sacrifice involved in the battle for a privilege that is too often taken for granted today. You are invited to meet Dora Lewis, National Woman’s Party Ratification Chair, to learn more about this important moment in women’s history.

Carol Spacht has extensive experience performing for children. She studied theatre at Villanova University and graduated with highest honors from Eastern University with degrees in Literature and Theatre Arts. An alumna of Germantown Theatre Guild and the Main Point’s Peanut Butter Theatre, she began performing solo in 1995.

As part of its mission to promote and interpret the history of Montgomery County, the Making History Greater series features scholars, authors, and historians who are currently working on telling new stories about the complexity of our region’s history. .