In preparation for our upcoming exhibit, Montgomery County Hospitals, we attempted to unravel a mystery regarding General Winfield Scott Hancock. On July 3, 1863, during the third day of the battle of Gettysburg, General Hancock was shot while on his horse. The bullet went through the saddle and lodged in the General’s upper thigh near the groin. Although wood and a nail (from the saddle) were removed from the wound, none of the field doctors could locate the bullet. 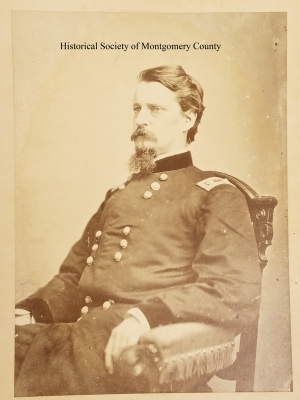 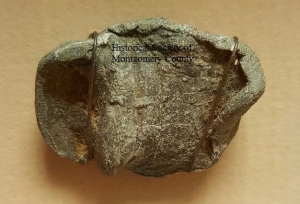 After examining the wound, Dr. Read realized previous attempts to remove the bullet had failed because General Hancock’s leg was not positioned in the same way he was sitting in the saddle at the time of his injury. Dr. Read instructed General Hancock to position himself similarly to how he was sitting in the saddle when he was injured. This allowed Dr. Read to quickly remove the bullet. 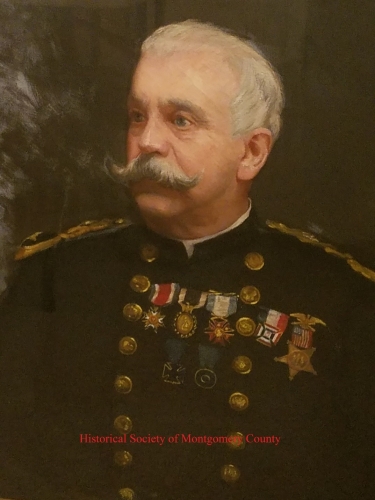 Here is where historians have been unable to come to a consensus: how exactly did Dr. Read get General Hancock into the proper position to remove the bullet? The most popular theory among historians is General Hancock was instructed to straddle a chair on the dining room table. However, other theories such as being put into a saddle on a saw horse or a barrel also circulate among Civil War buffs. So far, we have been unable to locate a primary source to prove any of these theories.

Dr. Read’s portrait and the bullet he removed from General Hancock will be on display in our upcoming exhibit, Montgomery County Hospitals. There will be an opening celebration tonight, June 27, 2019 from 6PM to 9PM. Tickets are $40 per person. The exhibit will be free and open to the public from July 1, 2019 through March 2020.

More in this category: « Atlantic Baseball School Closed for Independence Day »
back to top