The Last Execution by Hanging in Montgomery County

Around 1:00AM on September 1, 1909, a group of four robbers assaulted an elderly East Norriton cobbler, George A. Johnson, in his home near the intersection of DeKalb Street and Germantown Pike. After being hit on the head and shot, Johnson crawled about a quarter mile to seek help from his neighbor John Steffin. He was taken to Charity Hospital where he recounted the event to Sergeant Macolly. Johnson died the following day at Charity Hospital.

The discovery of fake mustaches and a gold piece taken from Johnson’s house lead to the arrest of six men: Frank Chicorine, Nich Maringe, John Ballon, Felix Fare, Frank Paruchi, and Antonio Jacovettie. The first four were involved in Johnson’s murder and the last two had previously attempted to rob Johnson. Fare was found guilty of second degree murder, which earned him 20 years in prison. Chicorine, Maringe, and Ballon were found guilty of first degree murder and were sentenced to hang. 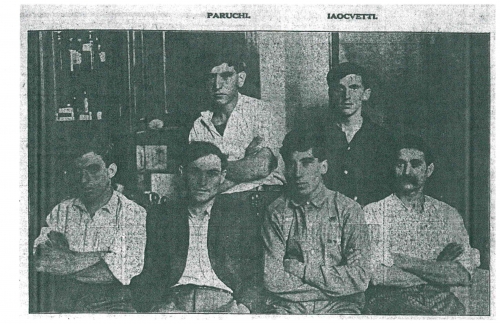 On June 23, 1910, a crowd of approximately 300 people gathered in front of the Montgomery County prison, even though executions were no longer held publicly. Chicorine and Maringe were hanged inside the prison. Ballon was reprieved by Governor Stuart hours before the execution was to occur. Chicorine and Maringe were falsely informed that Ballon was not present with them because the law only allowed for two people to be hanged at one time. This was claimed to have been done to minimize the potential for an incident as Chicorine was known to have made threats to destroy the prison with dynamite. Chicorine and Maringe were pronounced dead in front of twenty-five witnesses with the cause of death listed as “strangulation.” 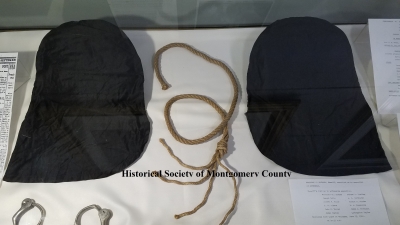 These were the hoods and remnants of one of the nooses used in this hanging. If you want to see these artifacts in person, be sure to attend our free Capital Sin program on Thursday November 14, 2019 starting at 7PM.

More in this category: « Firebombing at Valley Forge Plaza 1931 Flood »
back to top