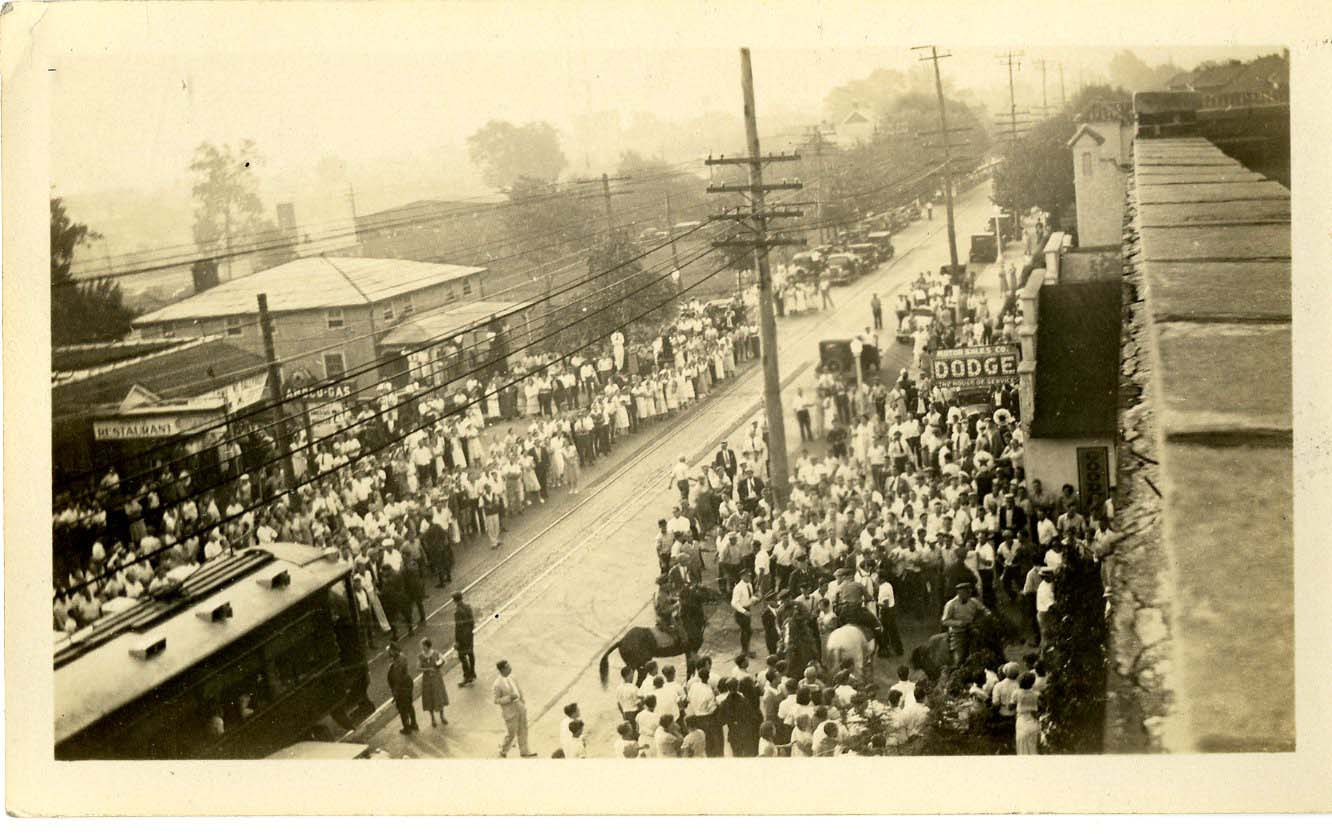 In 1933, Montgomery County, like every other place in America, was feeling the impact of the Great Depression.  At the same time, the new Roosevelt administration was working to relieve the economic crises with the New Deal.  Part of the New Deal was creating new industrial codes, meant to help businesses decrease waste and raise wages.  This came at a time of great unrest for American labor.

At that time, thousands of men and women in Montgomery County were employed in the textile industry.  The new codes led to a lot of uncertainty according to newspaper articles from the time.

Several mills went on strike, but most turbulent was the strike at the Dexdale Hosiery Mill (later Turbo Machine Company).  The workers at the mill went on strike not only for a 40 hour week and higher wages but also for recognition of their union.

The strike began on June 28th and shut down the mill.  After two weeks, the company, headed by Ludwig Schierenback, sent this letter to its employers with the card below enclosed. 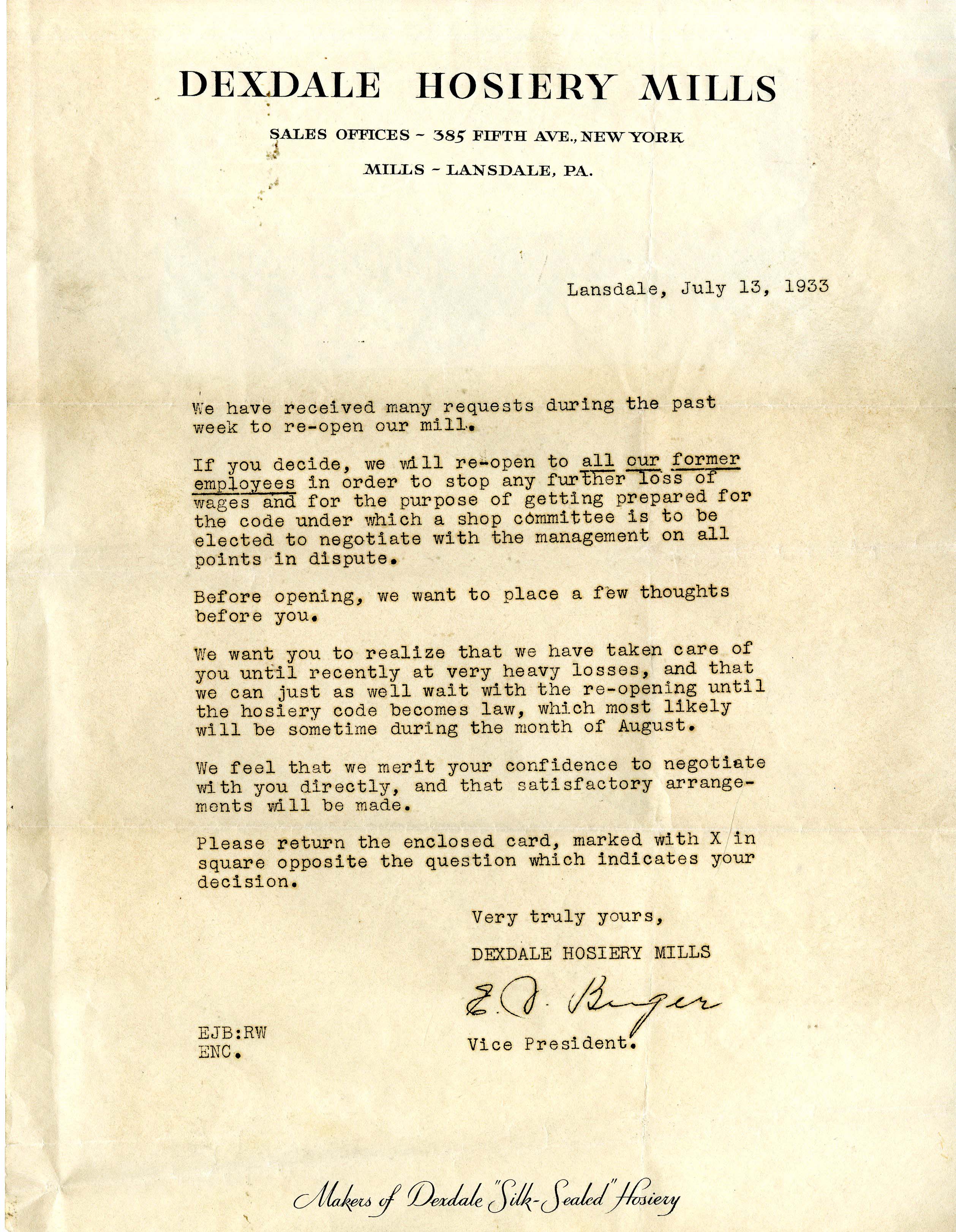 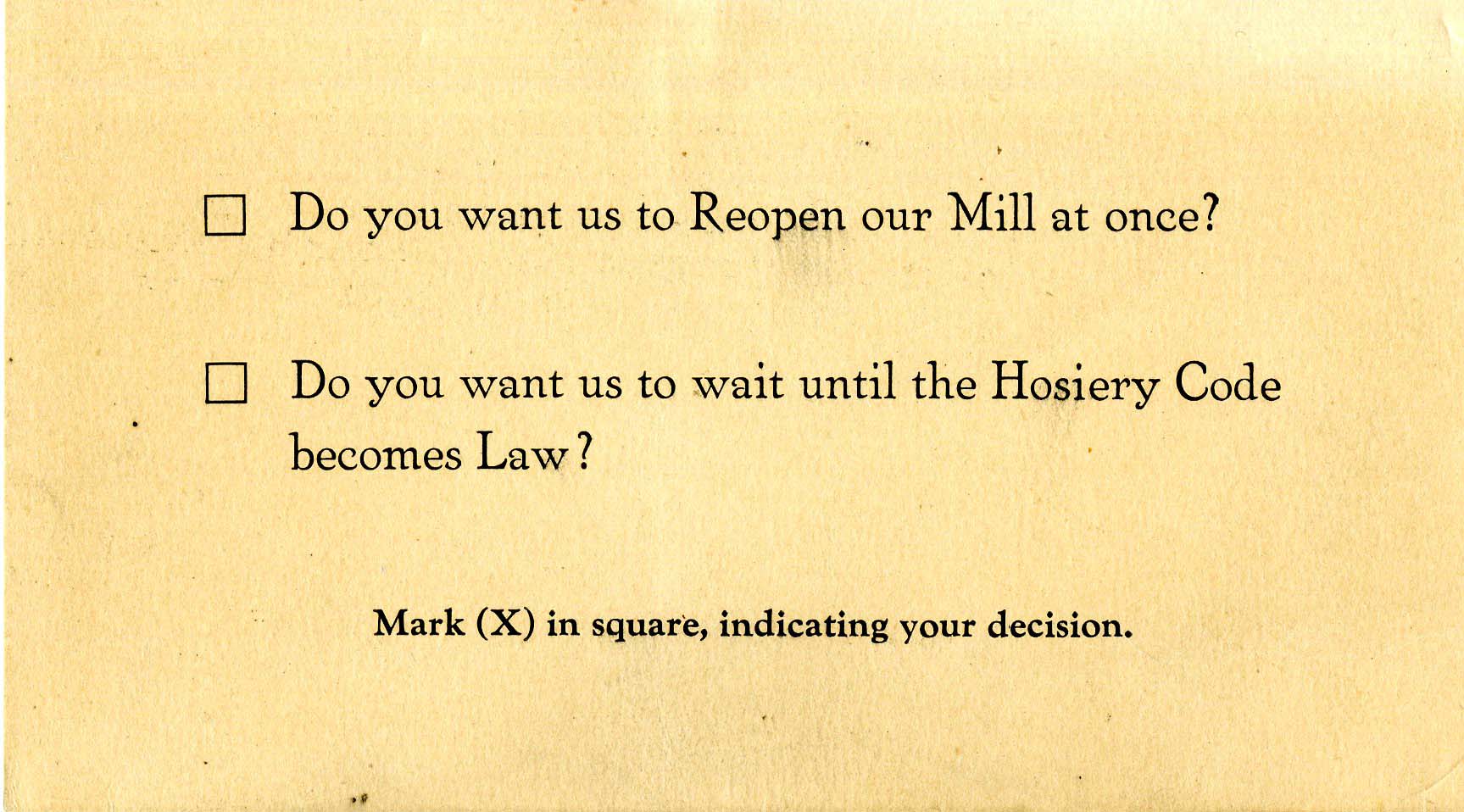 The Times-Herald reported that more than 50% of the workers voted to return and reopened with the same hours and pay as had prevailed before the strike.  About 400 picketers refused follow a proclamation ordering them off the streets, according to an article in the Philadelphia Evening Bulletin.  Darlington Hoopes, a state representative and a lawyer for the union, told picketers to ignore the edict.  Two men were arrested, but then the police stopped enforcing the proclamation. 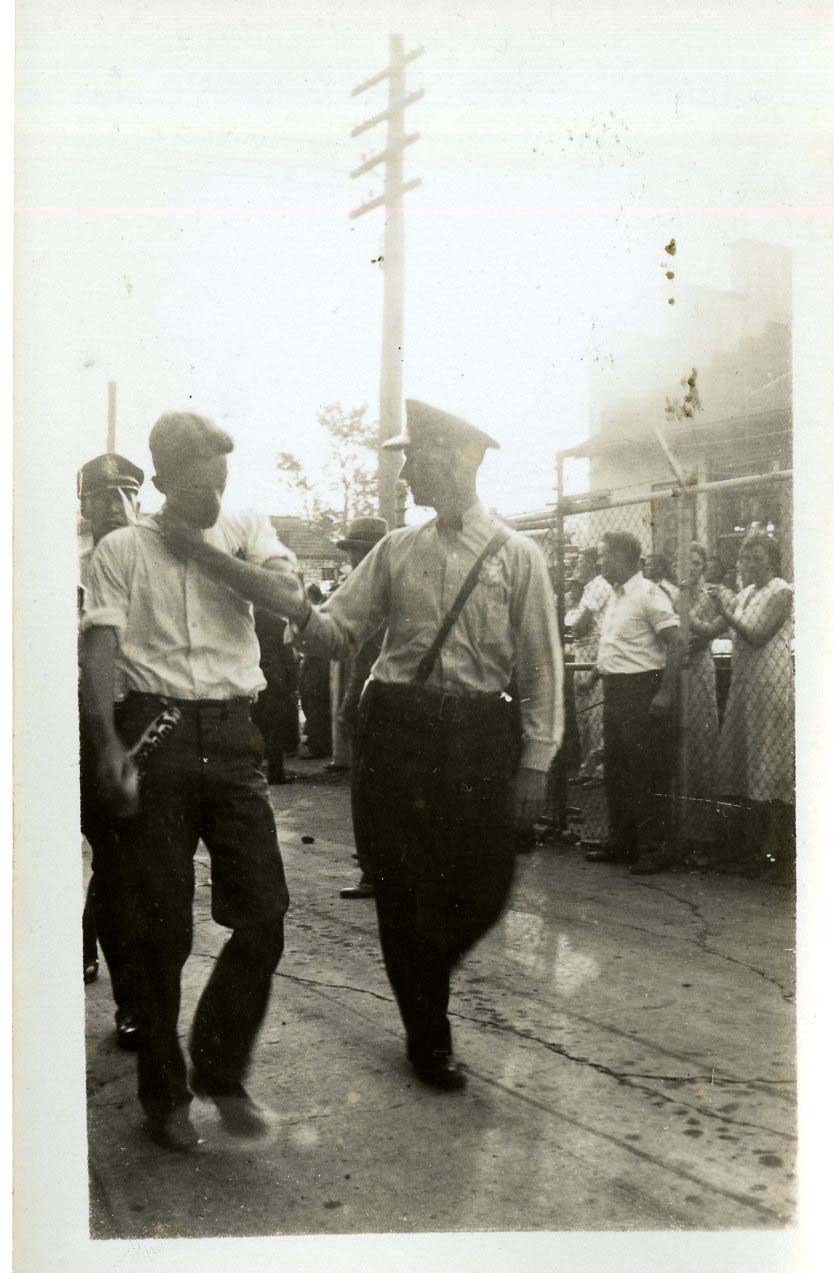 The newspaper articles and these photographs came to the Historical Society from Elmer C. Barnes.  The photographs are only labeled with the dates of the strike, June 28 – July 24, 1933, so we don’t know when in the strike they were taken.  They do give us a good idea of the disruption. 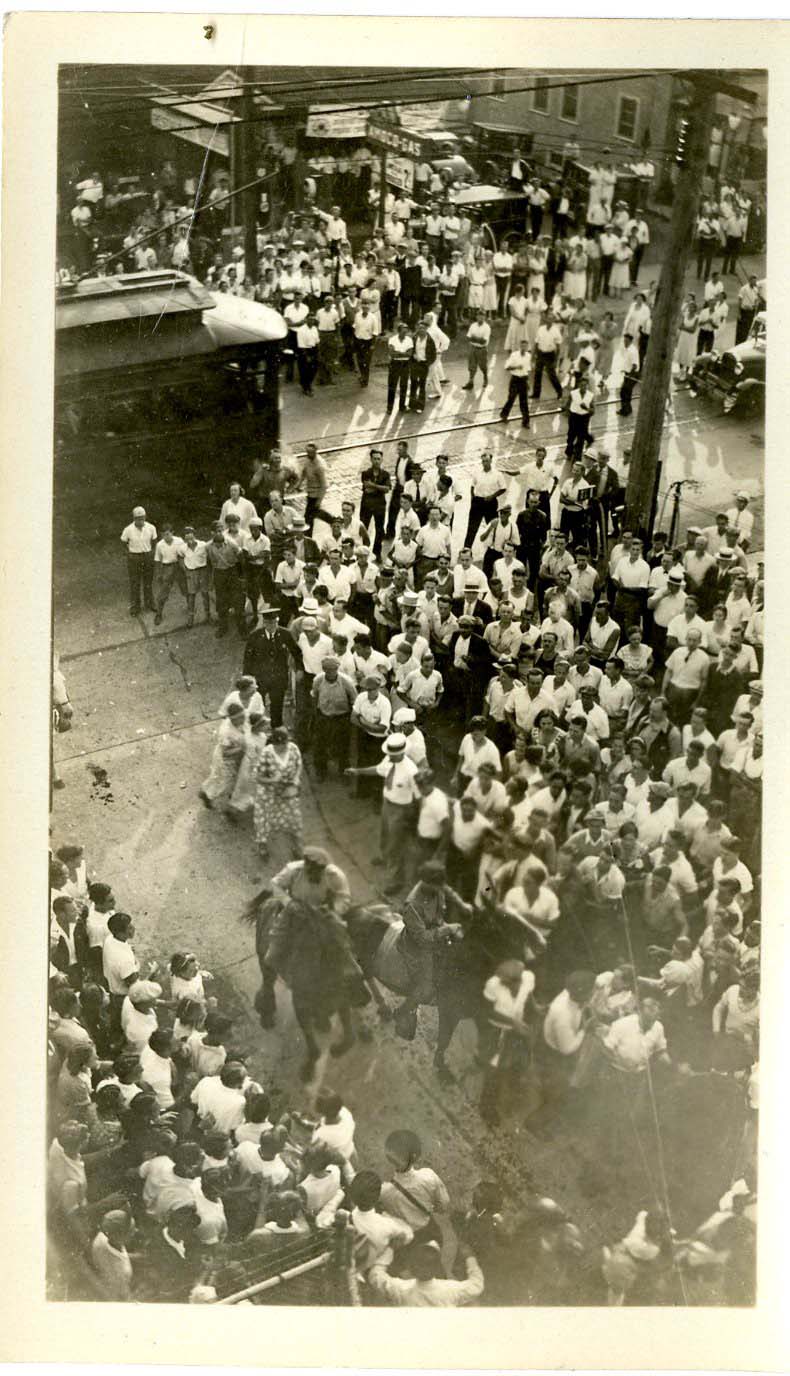 The attempt to reopen the factory without changing the working conditions only fueled the unrest.  On July 18th, the police used tear gas on the strikers.  Two days later, Theodore H. Hallowell, Cheltenham’s chief of police, shoot two sympathizers in the legs.  Both men, Claude Seiler and Wilmer Kriebel, recovered from their injuries (though both were later charged with inciting a riot).  The incident led to Governor Gifford Pinchot getting involved.  State troopers were sent in to replace local police, and the union, the American Federation of Full Fashioned Hosiery Workers, agreed to limit the number of picketers.  Finally, the new codes were published, raising the minimum wage.  The workers at the mill went back to work, but the end of the strike did not get the same newspaper coverage that the violence did.  It isn't clear from the newspapers whether the union was recognized.

More in this category: « The Old Gulf School A monument in Hatfield »
back to top