As we prepare for our Made in Montgomery exhibit, which opens June 27, 2018, I was excited to learn that one of our chairs is an early example of a swivel chair. 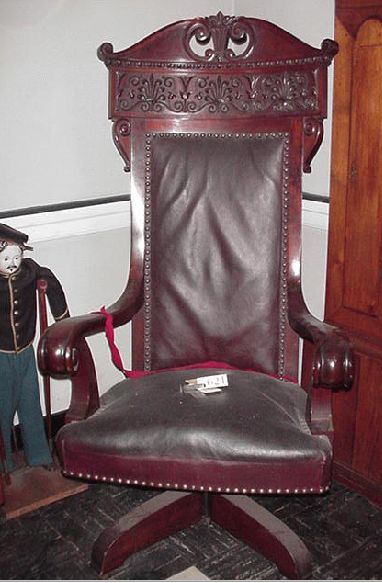 While the craftsman of this chair is unknown, its intricate detail suggests it may have been created in Philadelphia in the late 1800s. Made from mahogany, leather, and cast iron, this chair is a perfect example of 19th century swivel chairs. Although swivel chairs are believed to have been invented in the 18th century, this style of chair was not widely produced until the late 19th century. This was due to the necessity for a strong cast iron mechanism that both supported the weight of a person and allowed them to turn the chair without standing.

Although swivel chairs were around prior to the 19th century, no one had patented a design for this type of chair. This changed in 1853 when Peter Ten Eyck patented an American swivel chair. Unlike the cast iron mechanism used for this chair, Eyck’s design used a wooden construction and steel rockers. See how the two designs compare: 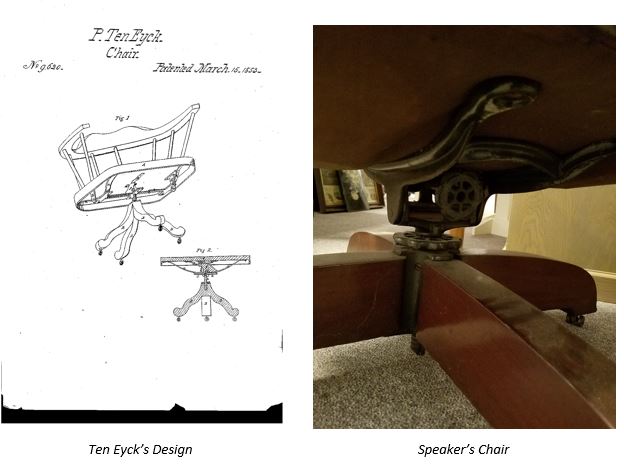 So who used this chair? Interestingly, this high back swivel chair was known as the “Speaker’s Chair” and was used by Henry K. Boyer in the PA House of Representatives. Boyer was a Republican who served the 7th District for six terms (1883-1890, 1893-1894, and 1897-1898). During his service, Boyer was elected as the Speaker of the PA House of Representatives three separate times (1887, 1889-1890, and 1897). Based on our records, we cannot determine if Boyer used this chair for all three terms as Speaker or if he only used it during one term. While we do not know precisely when Boyer used it, this chair certainly provides an example of superb 19th century craftsmanship.

More in this category: « Professor J. E. Reilley The Rittenhouse Farm »
back to top