This week, we have a guest blogger!  He's a story from our own Ed Ziegler:

Many years ago, while going through my Grandfather’s effects, I found a few Grange badges. These two were of particular interest because he lived in Worcester, and I couldn’t understand why the same Grange was also in Creamery.

I also found a notebook with the minutes of the first three and one-half years, and a membership roll book.

Pictured are the two delegate badges for Harmony Grange #891. One says Creamery and the other says Worcester.

The Grange movement began in the 1870’s. These were co-ops by which farmers were able to buy and sell, and therefore eliminate middlemen. This was important because, after the Civil War, farm produce prices dropped, and family farms were struggling.

Around this time, among the Granges formed in Montgomery County, a Grange was established in Creamery, a village in Skippack Township. This was Harmony grange # 891. The name Harmony probably came from Harmony Square, which was the original name of Creamery. The name was changed to Creamery in 1880, about the time the Grange was formed. We do not know when Harmony Grange was disbanded.

The farmers probably joined the grange because, due to its size, they could get better prices than the Farmers Union. This was also the beginning of the “Motor Power Period”, when tractors were replacing horses and wagons. The higher costs of tractors may have given the Grange an advantage in buying farm machinery. 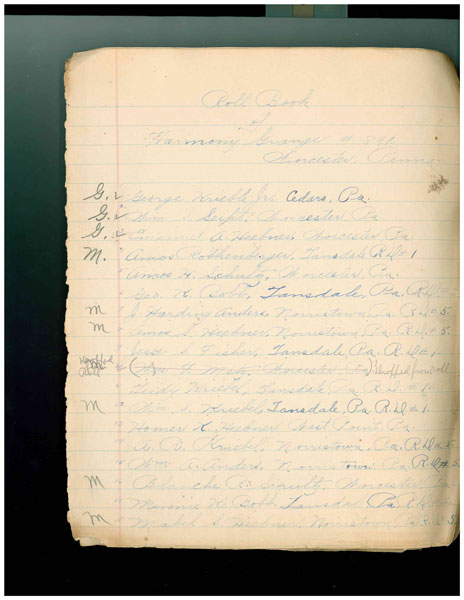 Image from the roll book for Harmony Grange (Worcester)