Upon first glance, this green glass mug may not appear to be historically significant. However, according to our records, it was bought in 1864 at the Soldiers’ Fair in Logan Square, Philadelphia. The Soldiers’ Fair, also known as Sanitary Fairs, was a grassroots movement where U.S. citizens used their own unique skills to sell products to provide funding for Union soldiers during the American Civil War.[1] 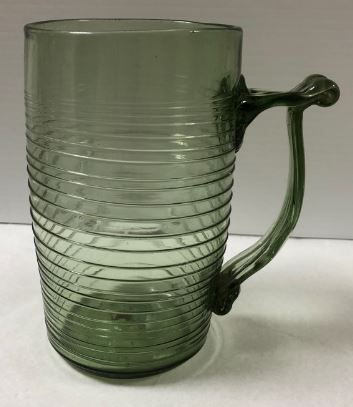 When the Civil War began in 1861, women across the Northern U.S. organized local fundraising events to provide supplies for Union Soldiers.[2] As this localized fundraising became popular, a law to create the U.S. Sanitary Commission was passed on June 18, 1861. This law allowed the civilian run Commission to organize the funding and distribution of medical and sanitary supplies for the Union Army.[3] As the Commission became more organized, larger fundraising events, like the Sanitary Fairs, became more prevalent.

More in this category: « Walking Montgomery County The Diamond State Fibre Company »
back to top