The institution went through many name changes over the decades, but its beginnings were simple enough. In 1905 about twenty men of Telford met to discuss starting a building and loan association, according to a typewritten history of the organization’s first years that was included with the materials. That meeting led to a bigger meeting, held on November 9, when the assembled men elected W. B. Butterwick chairman and E. C. Leidy secretary. William S. Schlichter from the Sellersville Building and Loan spoke to the group about the benefits of such associations. “Ninety-two were subscribed for before the meeting adjourned,” the history tells us. In January, 1906 the Building & Loan made its first loans to John M. Overholt and Clayton H. Detweiler, both for $600.

The collection includes many of the association’s annual reports, starting with the third annual report in 1908. Meetings were held monthly in the Fireman’s Hall in Telford. The 23rd annual report explains, “The primary aim of the Organization is to aid the rising generation to homes, thrift and saving, sharing in high standard financiering.”

In 1954, the annual report lists that they’ve opened an office at 116 South Main Street in Telford that would be open the first ten business days of the month, and for the first time, a phone number is listed.

In 1959, the name changed to Telford Savings and Loan Association, and in 1964 it moved to a new building at 20 South Main Street. In 1979, the association was acquired by Red Hill Savings, which had twelve branches at that time. Red Hill Savings merged with several other banks after deregulation in the 1980’s and became Hill Financial. By 1989, it was the largest savings institution in Pennsylvania. It then collapsed with the rest of the savings and loan industry. It was eventually bought by Meridian Bank Corporation of Reading. 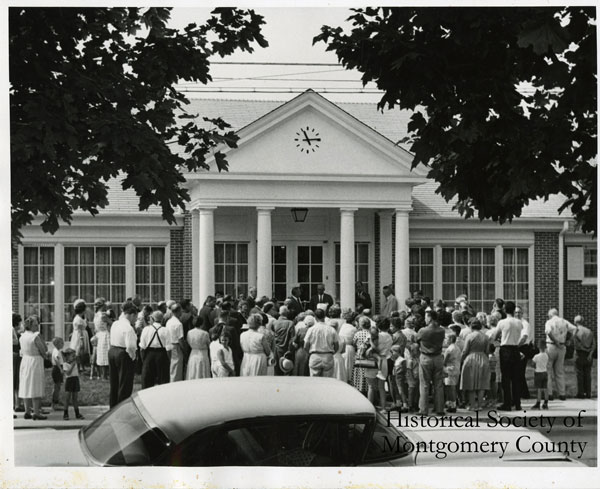 After several more mergers, what was Citizens’ Building and Loan Association, is now part of Wells Fargo, which still operates the building at 20 South Main Street.

More in this category: « "It worries me considerably" A Grave Mystery »
back to top