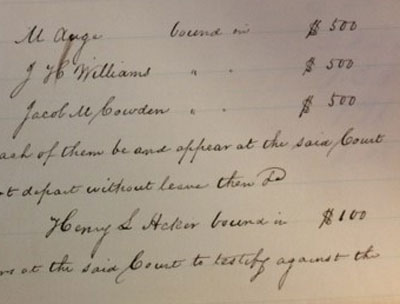 If you’ve ever come into our library to do some family research or look up some local history you’ve probably used one of the several historical and biographical works by such as Milton Bean, Charles Hunsicker, and Moses Auge. This week’s blog is about Moses Auge, author of Lives of Eminent Dead and Biographical Notices of Prominent Living Citizens of Montgomery County, Pa. As I’ve noted in this blog before, people in the past were not concerned with catchy book titles.

Auge was born in Delaware in 1811 and spent his youth in Chester County. He moved to Norristown after he married. He was a hatter by trade. The 1860 Norristown city directory lists him as:

"Egypt Street" is now Main Street. He edited two newspapers in Norristown, the Republican and the True Witness. Both papers were pro-temperance and anti-slavery.

The masthead of the Republican after Ague's time as editor

During his time editing the Republican, 1857-1862, Auge and his co-editor John H. Williams were both sued for libel by Henry L. Acker. We don’t have a copy of the original paper, but luckily for us, the indictment reproduced the article, along with interjections of legalese:

“Aha!!! Our old friend Acker (meaning the said Henry L. Acker) brother of the editor of the Norristown Register, late editor of the Pottsville Democratic Standard, and post-master at that place under Buchanan, was one day this week honored with a visit from the U. S. Marshall which functionary favored him with a free ride to Philadelphia to answer a charge of embezzling six thousand dollars (meaning six thousand dollars of the public monies of the United States of America received by him the said Henry L. Acker as such postmaster) it perhaps be remembered by our readers, was some time ago, much troubled about some people long ears! We told him at the time, that, although not a very graceful appendage, they were not so apt to let their owners into trouble as were long fingers (meaning thereby that the said Henry L. Acker has then and there unlawfully appropriated money to himself which did not justly belong to him), and now, we suppose, he will believe we were about right. Virtuous Acker (meaning said Henry L. Acker) while he presided over the columns of the Standard who so horrified and indignant as he over the frauds and thefts of the government contractors and Republican office holders. Now how have the might fallen. Sic transit gloria mundi.”

A surprising $500 bond was entered for each man and one Jacob Cowden, who is not mentioned in the indictment. Acker himself was ordered to pay a bond of $100 upon condition he appear. We also have the total costs of the trial, which called thirteen witnesses, who each cost the Commonwealth $1.50 (the paper doesn’t say if this was to feed them or transport them or what). Acker himself cost the county $7.17. 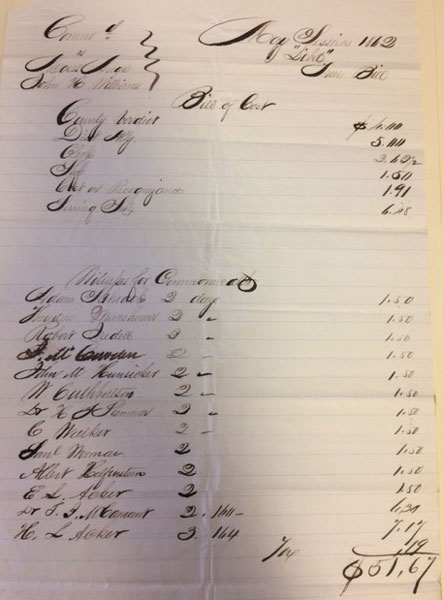 The only thing we don’t know – the verdict. It’s not among the court papers, nor does the case seem to have been covered in the Times-Herald (although, its publisher, Robert Iredell was called as a witness). Auge’s time at the Republican ended the same year, however. He published his well-used book of local biographies in 1878 and died in 1892.