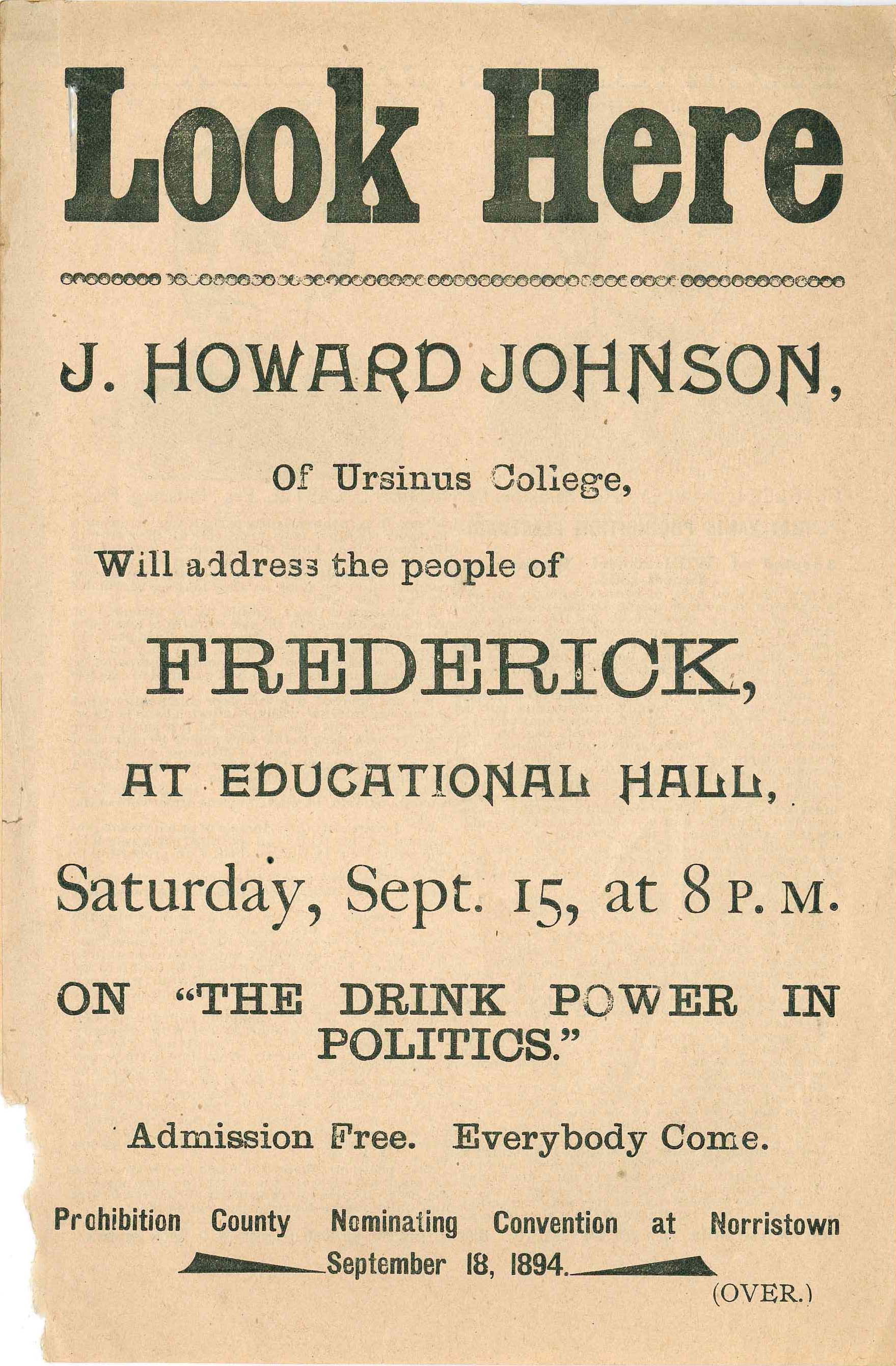 It might be hard to imagine now, but the sale and consumption of alcohol were once hotly debated issues in Montgomery County.

With its large German population, the county was home to many breweries, Adam Scheidt perhaps being the best known. However, it was also home to many temperance societies, both local ones and nationally affiliated groups like the Sons of Temperance and Woman’s Christian Temperance Union. 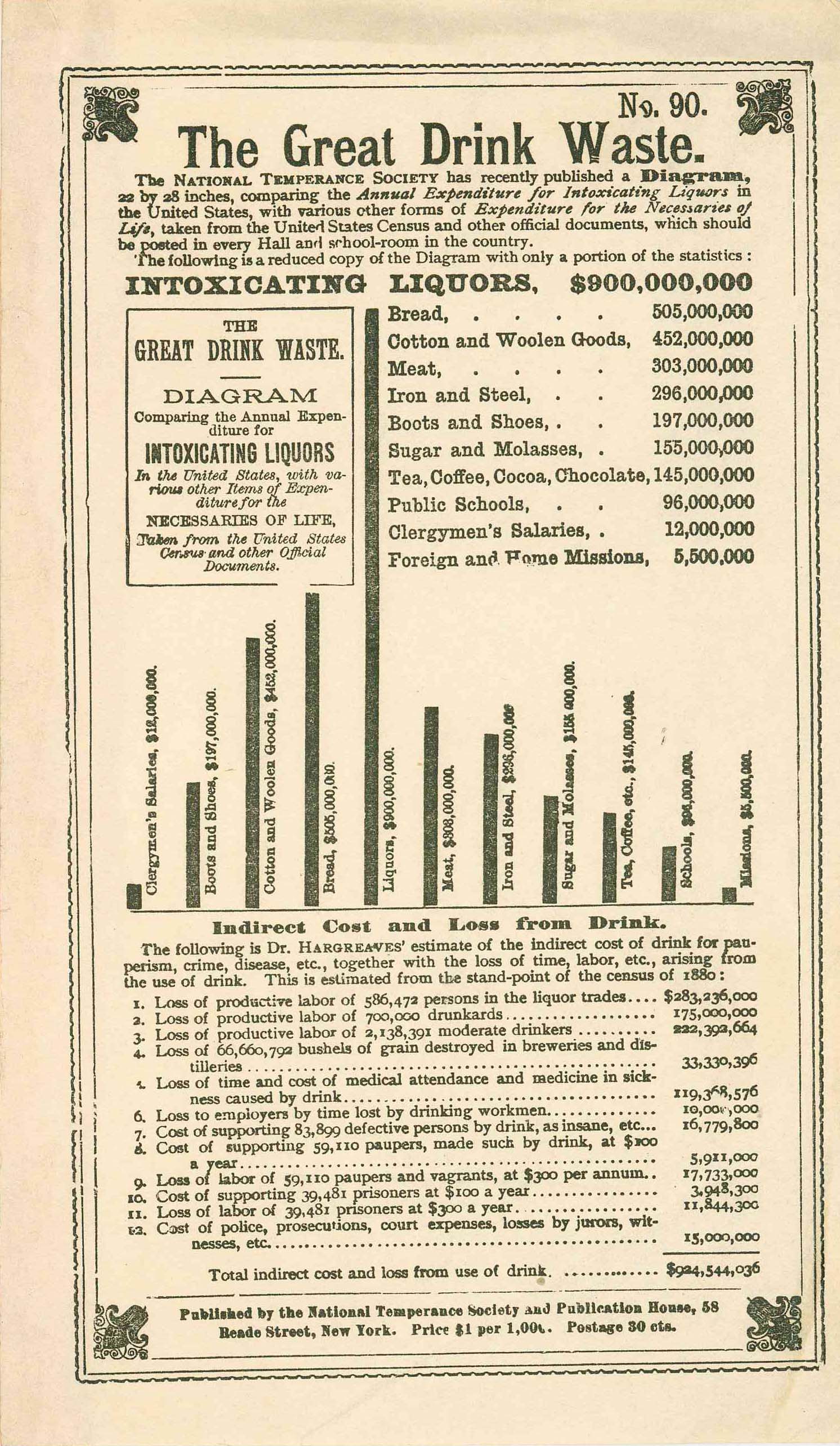 The Temperance movement is an interesting one that combined several aspects of nineteenth-century America – clubs, “do-gooding,” political engagement, and crusading zeal. First, I think a quick explanation of the name of the movement is necessary. “Temperance” is a synonym for moderation, and in the earliest years of the movement (1820’s – 1830’s), it mainly focused on discouraging the consumption of hard liquor and drunkenness.

By the end of the 1830’s the goal the movement had changed, and many members of temperance societies pledged to abstain from alcohol totally (with a capital “T” written next to their names). After the Civil War, what had been something of a fringe cause became a mass movement that used preaching to discourage the public from drinking and lobbying the government for more stringent laws on the sale of alcohol or for outright prohibition. 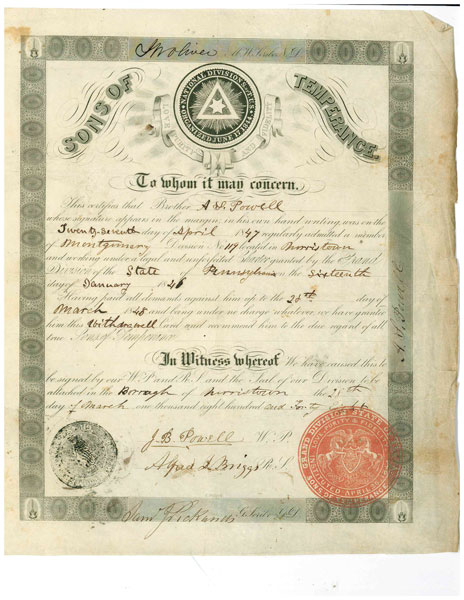 The Norristown branch of the Sons of Temperance was founded in 1845, just three years after the original chapter was founded in New York. Moses Auge was one of the founding members, and he donated some of the group’s early papers to the Historical Society in 1887. (If anyone is interested, that makes them one of our earliest donations, number 108, to be exact.) The Sons of Temperance was like many other fraternal groups popular at the time. There was a secret initiation and death benefits for members.

We also have the papers of the Law License League of Norristown, a group that lobbied the county to enforce standing laws regarding the sale of alcohol, which they believed would reduce the number of public houses in the borough. 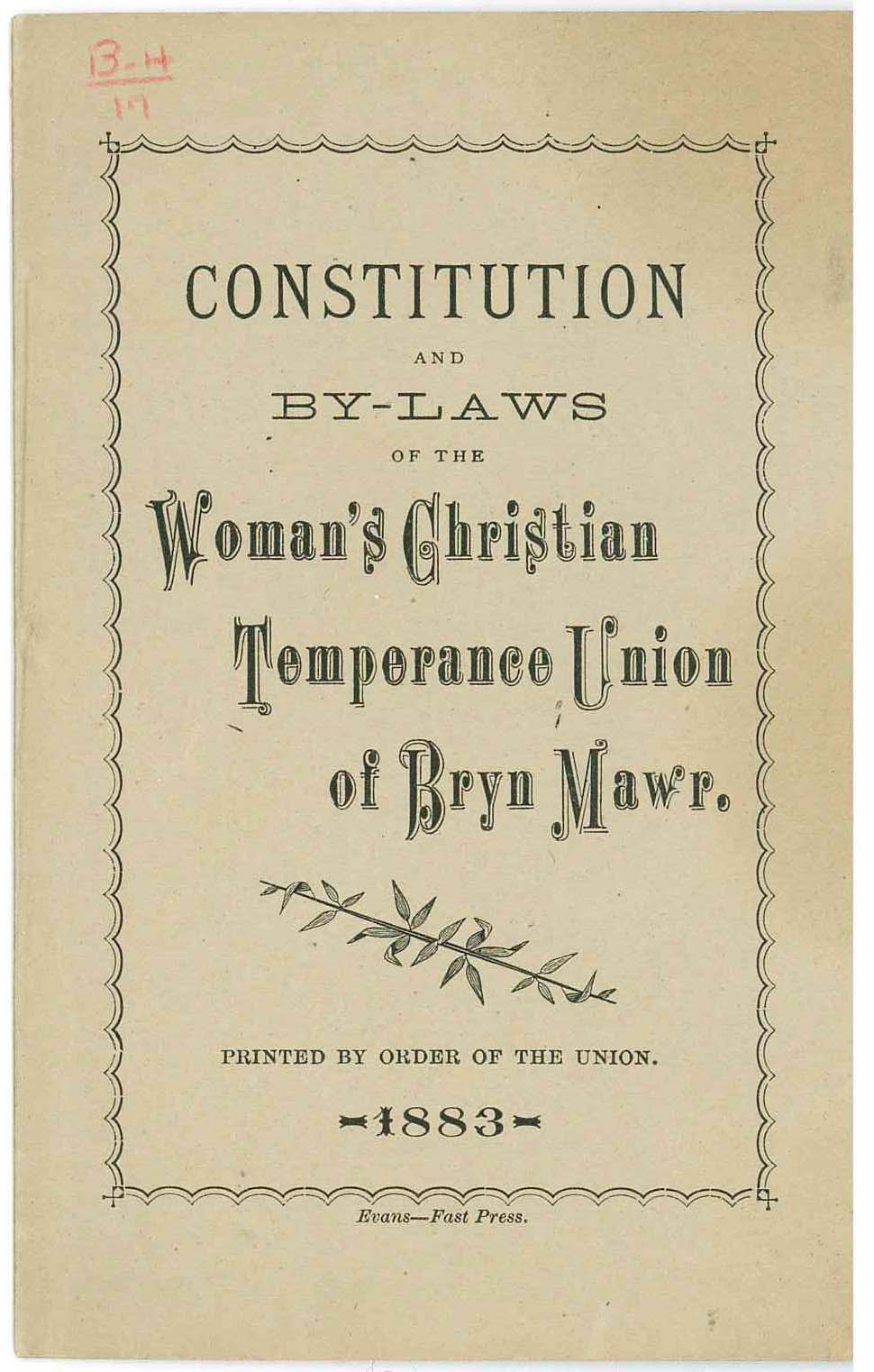 The Woman’s Christian Temperance Union (which still exists) was also present throughout the county. They sponsored speakers and meetings. In our collection, we have a 1916 publication listing the names of people who signed petitions for liquor licenses for various Norristown establishments. 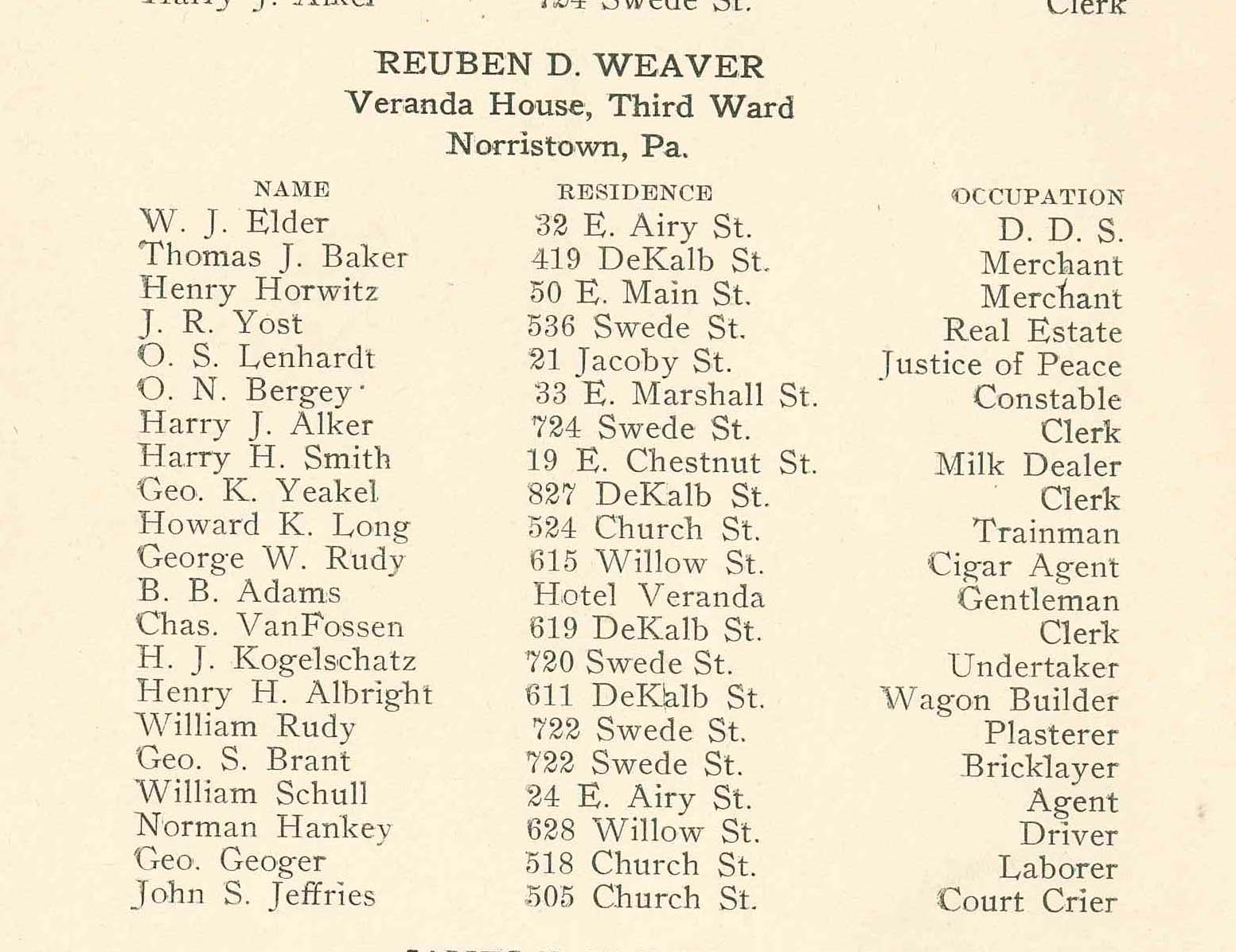 All of these groups promoted total abstinence from alcohol, but for some people, that didn’t go far enough. One of Montgomery County’s most progressive reformers was Dr. Hiram Corson. He often made public speeches in favor of temperance, but he was not a member of the Sons of Temperance. In his diary of 1847, he wrote of his opposition to the Sons of Temperance “on account of their allowing Root Beer, pop, &c.” I guess cold water was good enough for him. 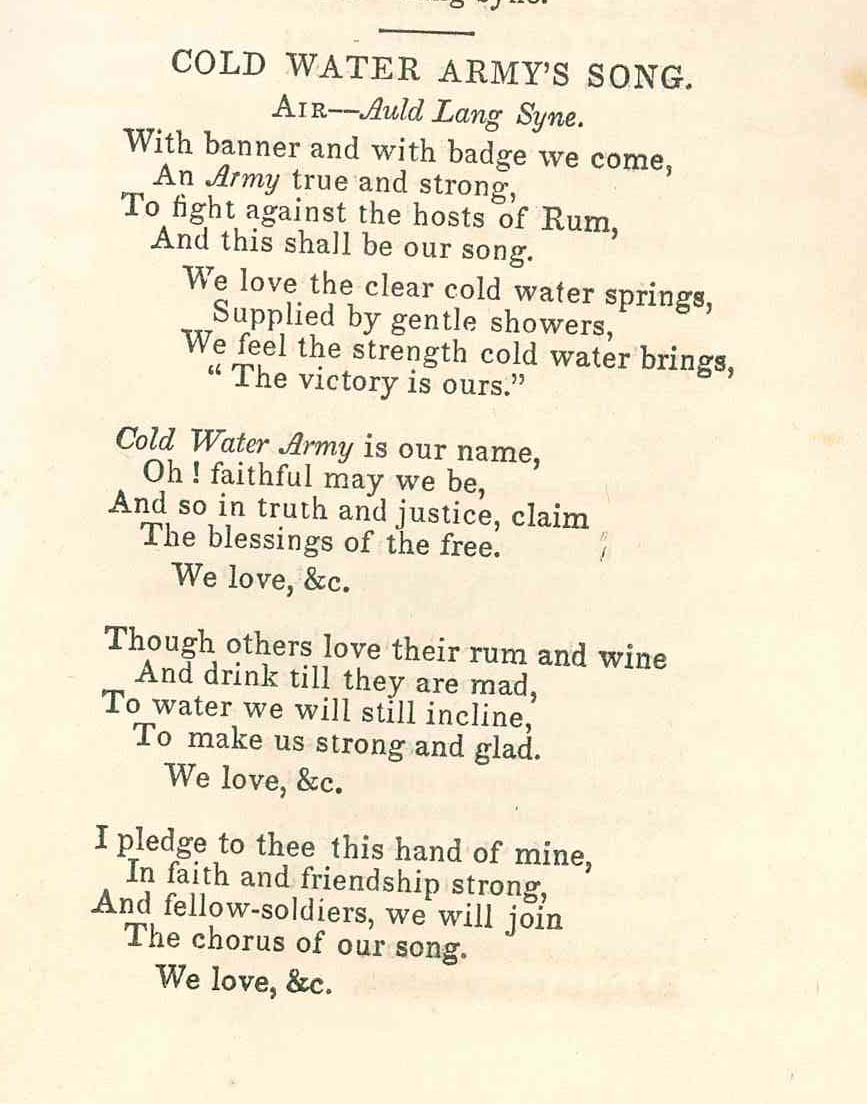