The Mosaic Creation of the Earth

One of my favorite subsections of our library is our small collection of books by local authors. I don’t mean Newbury Award winner Jerry Spinelli, or nineteenth-century bestseller Max Adeler, I mean the weird, self-published books that are sometimes hard to fit into the Dewey Decimal System. A few years ago, I wrote about Pool of Seduction, a novel of the court of Louis XV. If you’ve visited Montgomery Cemetery, you might have seen a small note about Helen Gilbert Slingluff, who wrote of her travels through Germany (and what had been Austria) in 1938-39 and mainly complains about the traffic (oh, that Munich Conference!).

Today, I’d like to write about another self-published book, The Mosaic Account of the Creation Affirmed and Silent Monitors of the Past Described and Illustrated, with Object Lessons of Each Day’s Part of the Creation… it goes on from there for a few more lines, but you get the idea. It was written and published in 1892 by Jesse King of Norristown.

King goes through the account of creation from the Book of Genesis line by line, explaining their meaning and expanding on them. He is not always literal. For example, he explains that although Moses says that God created the sun on the fourth day, since God created light on the first day, “we unhesitatingly believe that in the morning of the first day of the year one, the sun was created.” What actually happened on the fourth day, he explains, is that the skies clears of clouds and fog, and the sun and other objects in the sky became visible for the first time.

But, it’s not King’s theories or reasoning that makes this book interesting, it’s his evidence. He takes his proof from the local landscape in Montgomery County and the surrounding area. For example, he uses the famous Ringing Rocks of Bucks County as proof of Noah’s flood, and, perhaps, Manifest Destiny. He writes, 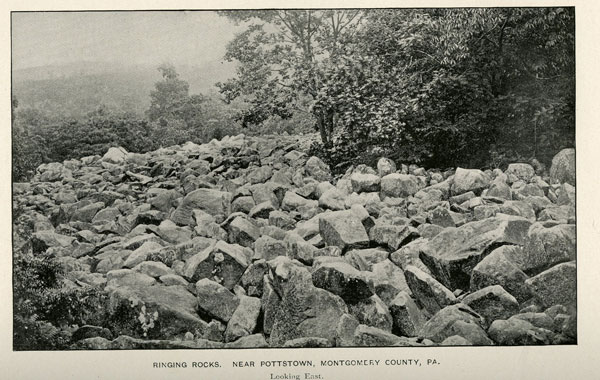 "Some rocks are marked with abrasions of parallel lines from two and half to four inches in width across their faces, much resembling the stripes of our 'national emblem,' which no doubt were made by some prehistoric patriot, prophetic of an era when such emblem would be adopted to proudly float over his country [emphasis in original]; and where he could have left an impression of his imaginative brain more fitting than on those rocks?" 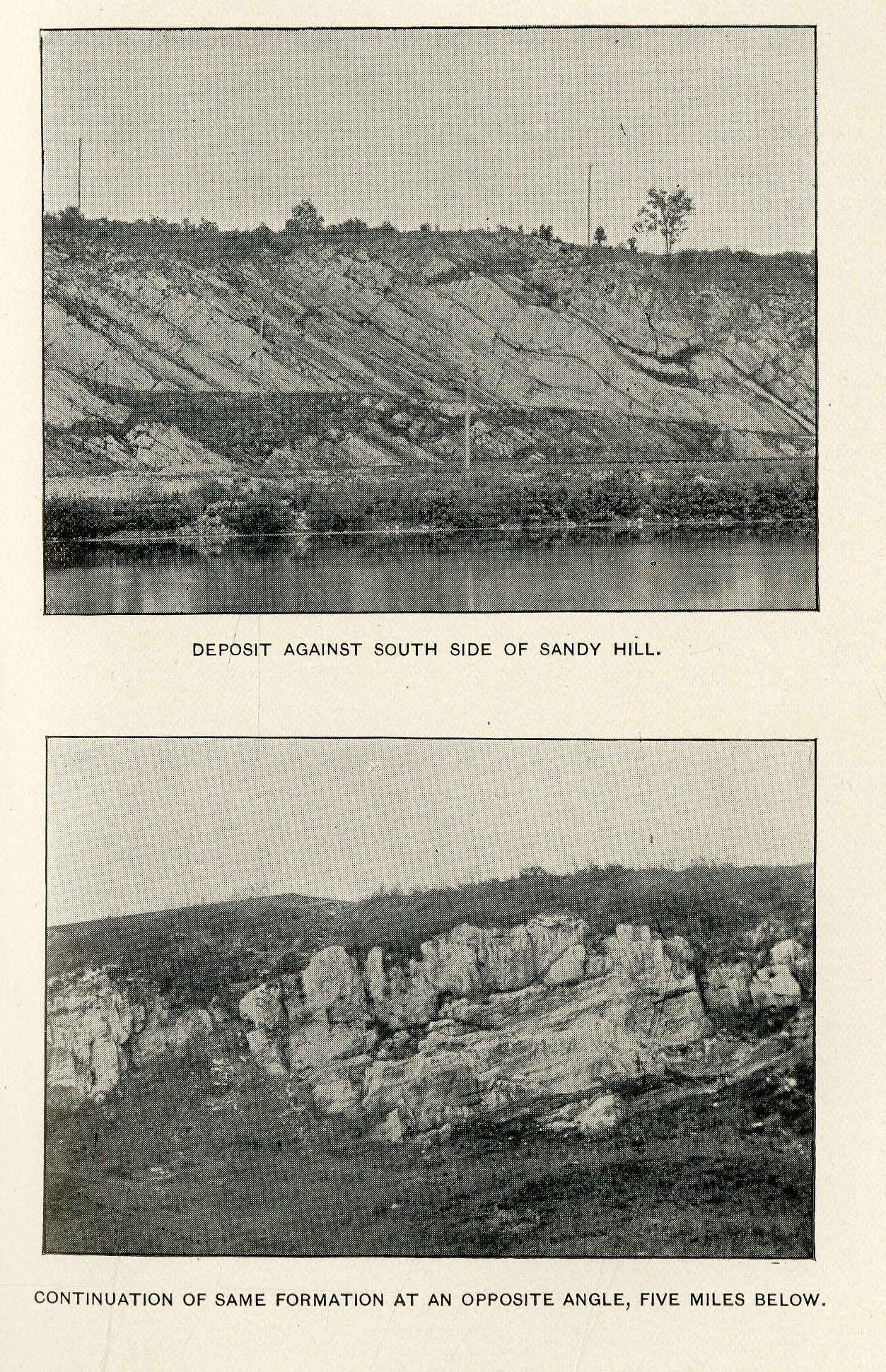 Many of his arguments focus on proving that Noah’s flood was a real historical event, such as when he uses a local limestone deposit to show the level of the flood waters. He also uses a cave found with many animal bones in Port Kennedy as proof that the animals gathered there in fear during the deluge. King’s book includes many illustrations, including diagrams of the earth and photographs of the local sites he uses for evidence. 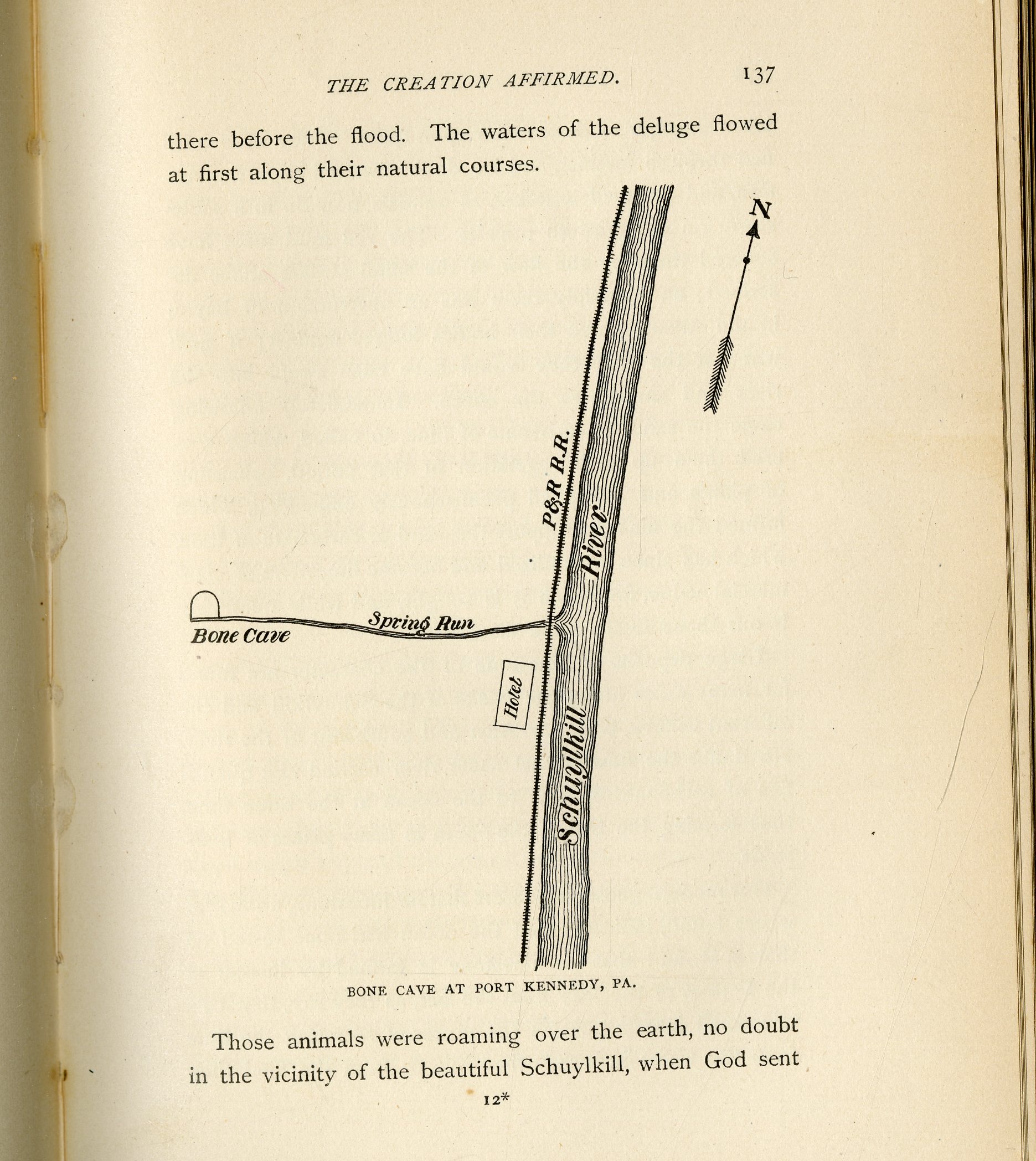 We don’t have any information on Jesse King on our collection, but I found him on Ancestry. He died in 1908, and his death certificate lists him as a salesman. In the 1880 census, he’s listed as a carpenter. So, he was a man of many trades and an interest in geology. He mentions several times that he disagrees with the way geology was being taught in schools, and that seems to have been his motivation. Overall, the books demonstrates King’s passion on the subject of geology, but it’s written in an overly formal Victorian style that can be hard to follow at times.

The Little Golden Books series turns 75 this year. If you’re like me, you remember the adventures of the Poky Little Puppy and other characters very well.  The Golden Books were sold in 1942 for 25 cents each, and they were meant to be affordable for every family.  Of course, children’s book existed before then, and last week, I found a few in our upper stacks.  They were donated by Mrs. Anna Bergman of Philadelphia in 1955. 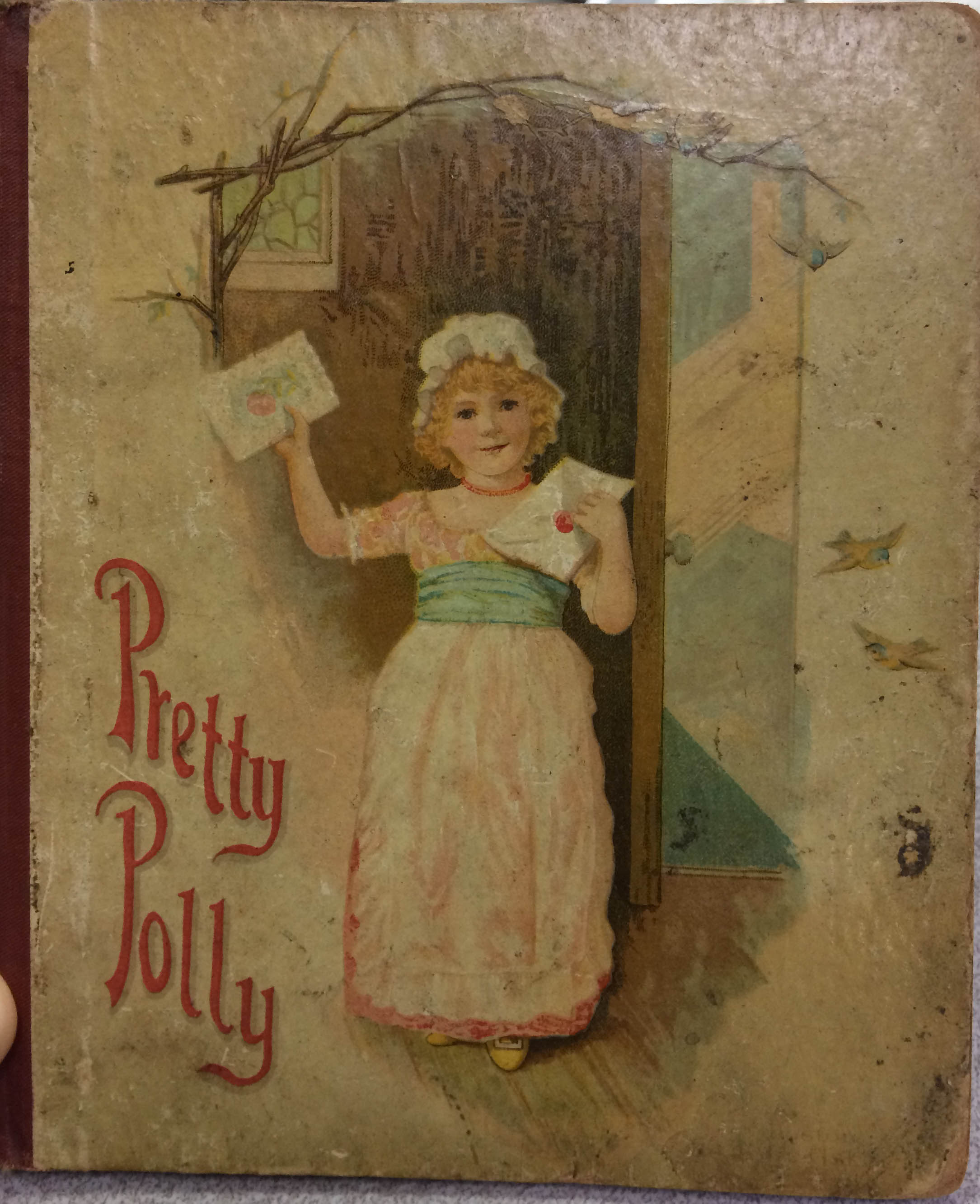 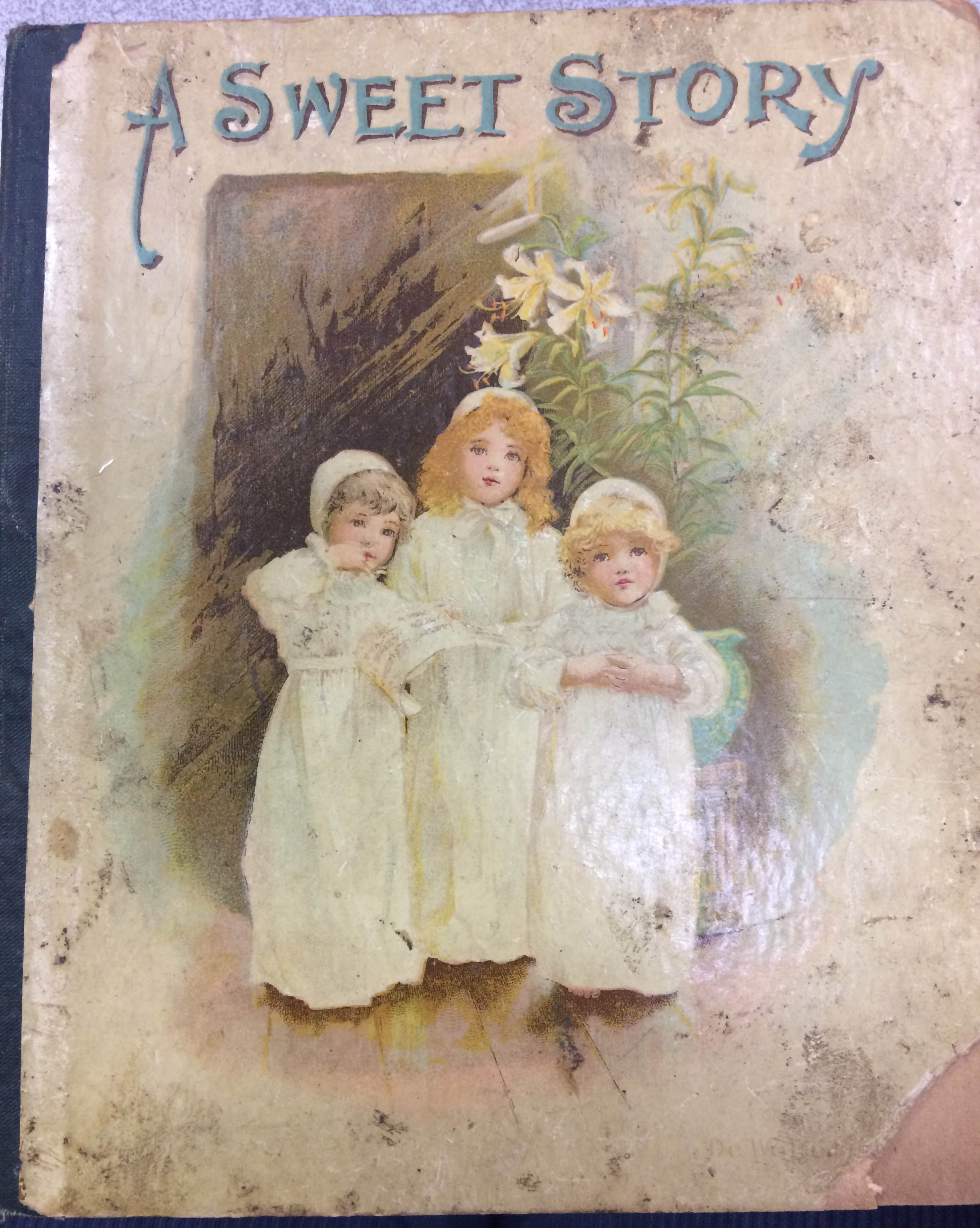 The first group I’d like to share have no publication information at all. I don’t know where or when they were made.  Three give an author at the very end of the text as Edric Vredenberg, a British writer and editor a several children’s books.  He was active as a writer from about 1890 to 1930.  Based on the illustrations in the book, I would guess these were produced during the earlier part of his career. 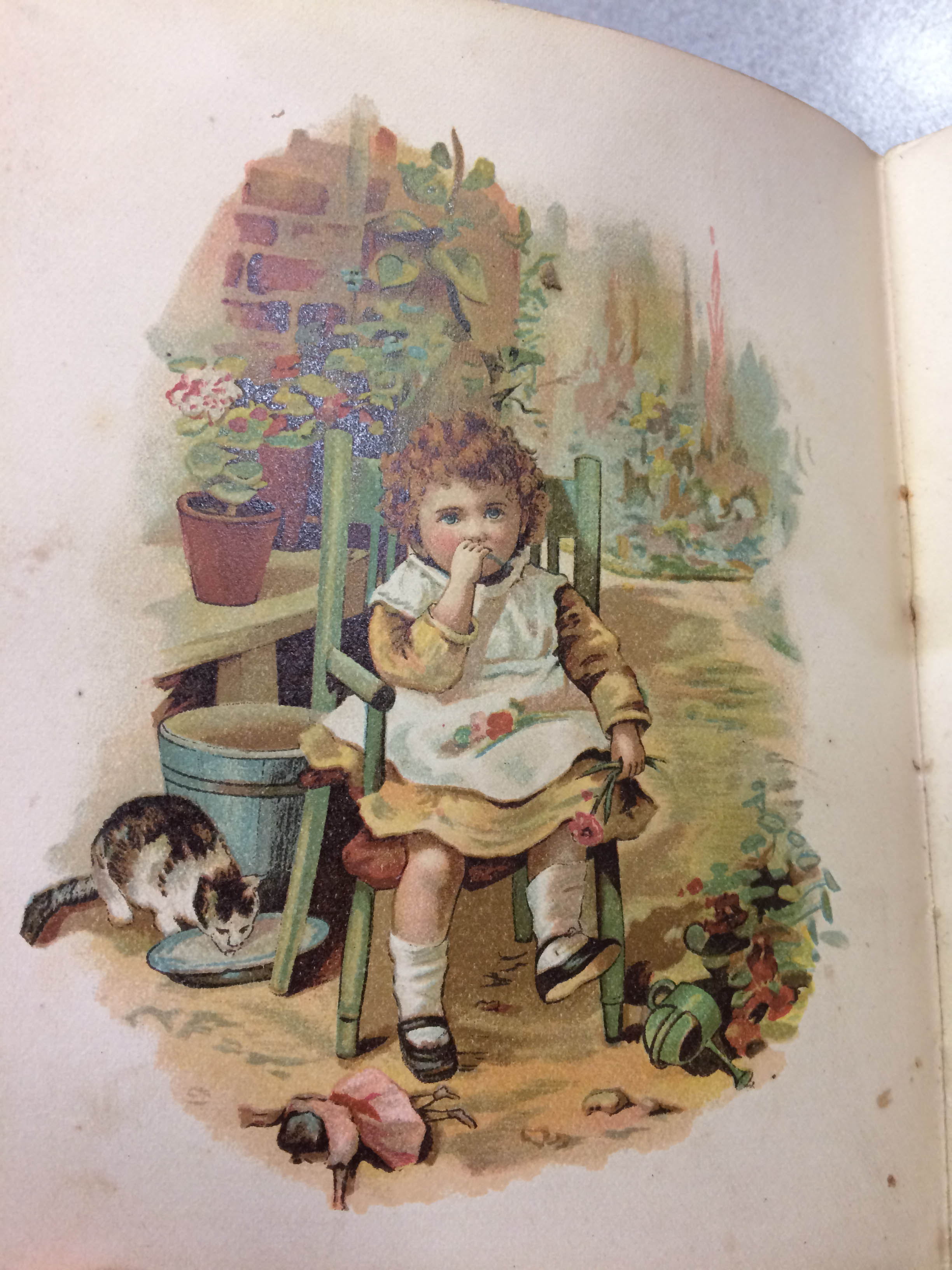 Looking inside the books, you can see there is a lot of text compared to modern children’s books. They all have wonderful illustrations in both black and white and chromolithographs, a popular form for children’s books in the 1880’s and 1890’s. 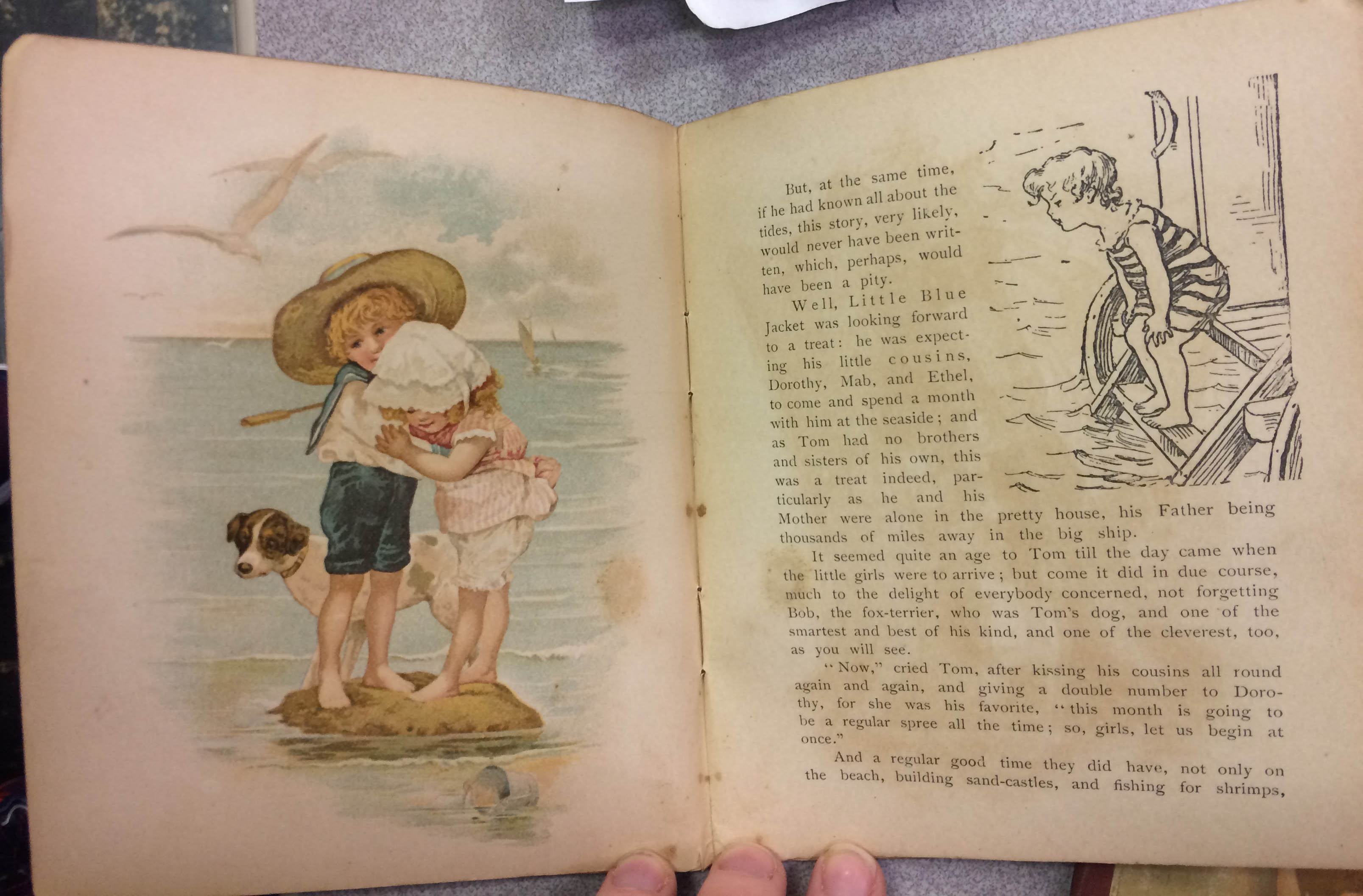 As you can see the stories all feature cute children and animals. 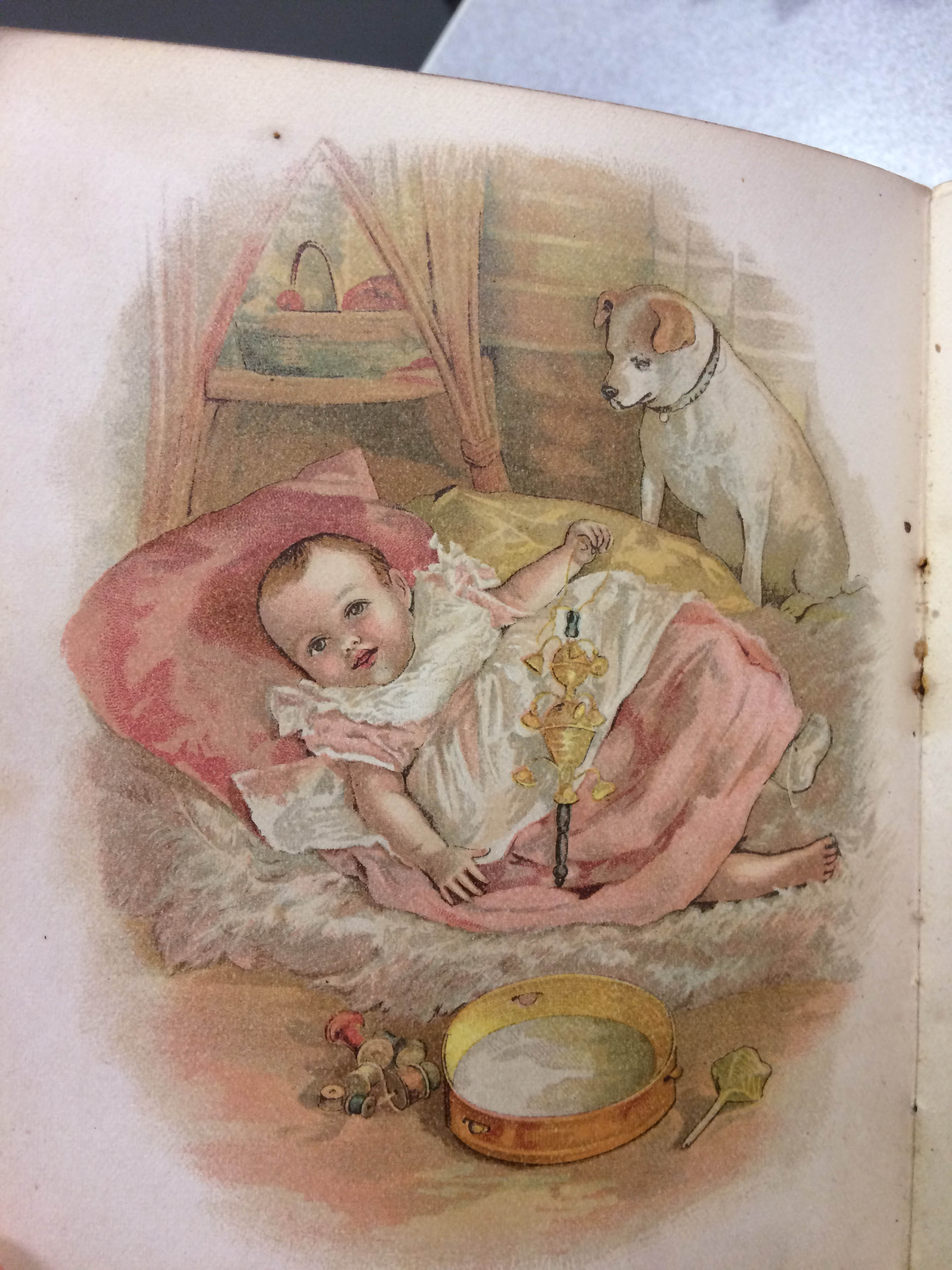 In addition to these books we have this tiny children’s Bible from 1834. It was sold by M. R. Wills in Norristown and even has a few small illustrations.  The book was written by “A Lady of Cincinnati.”  The Bible was donated by Martin Connelly in 2001. 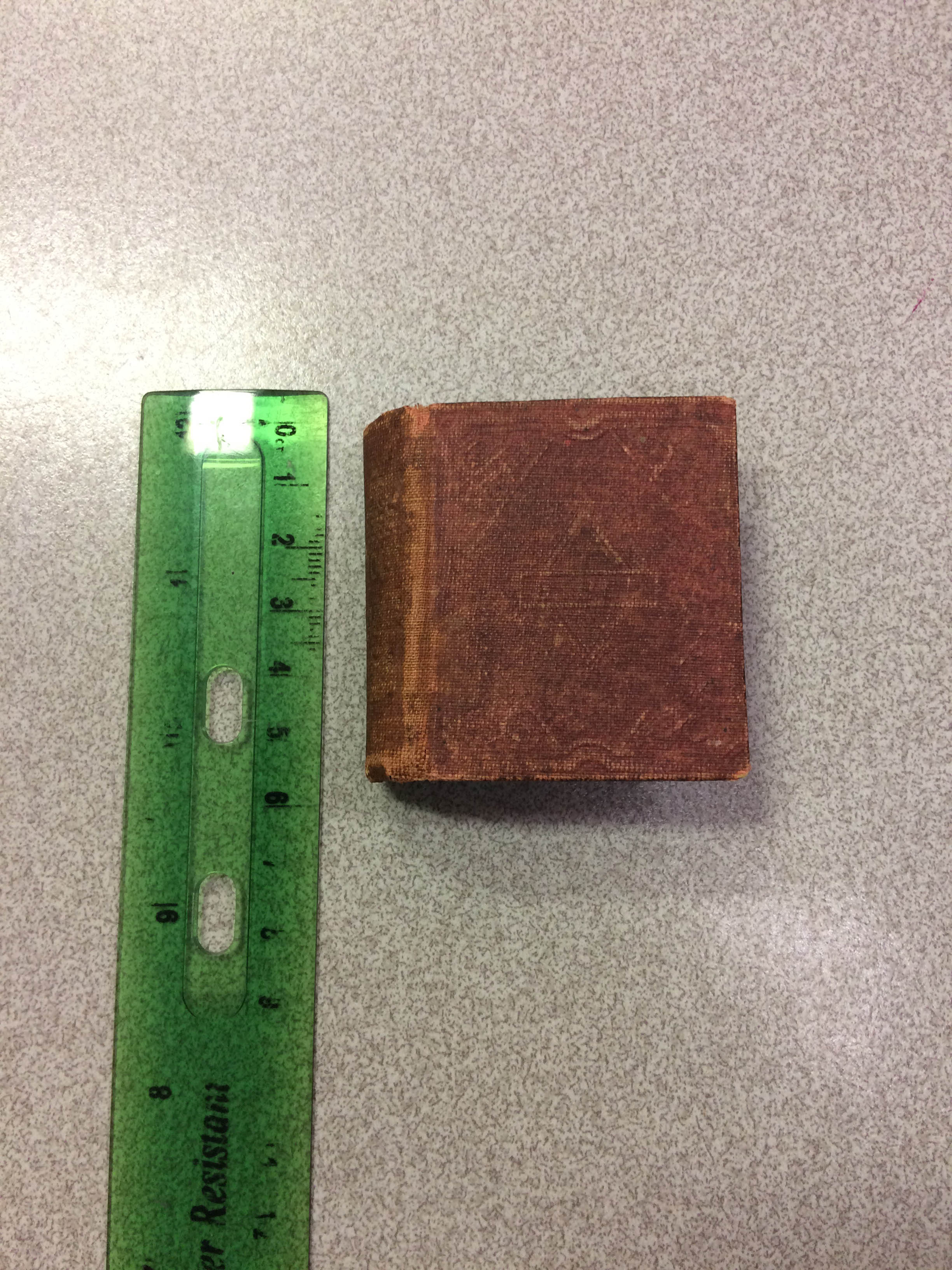 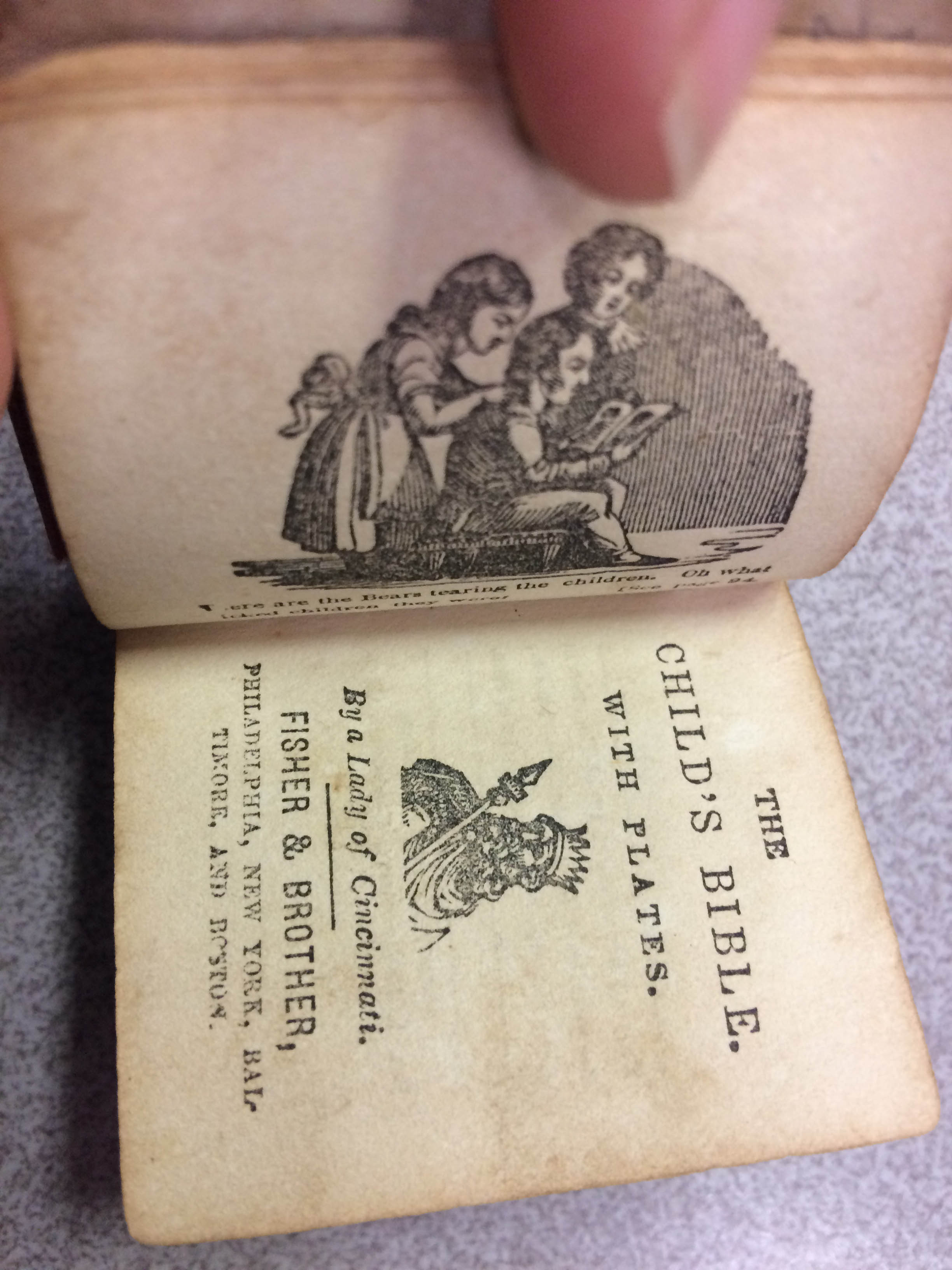 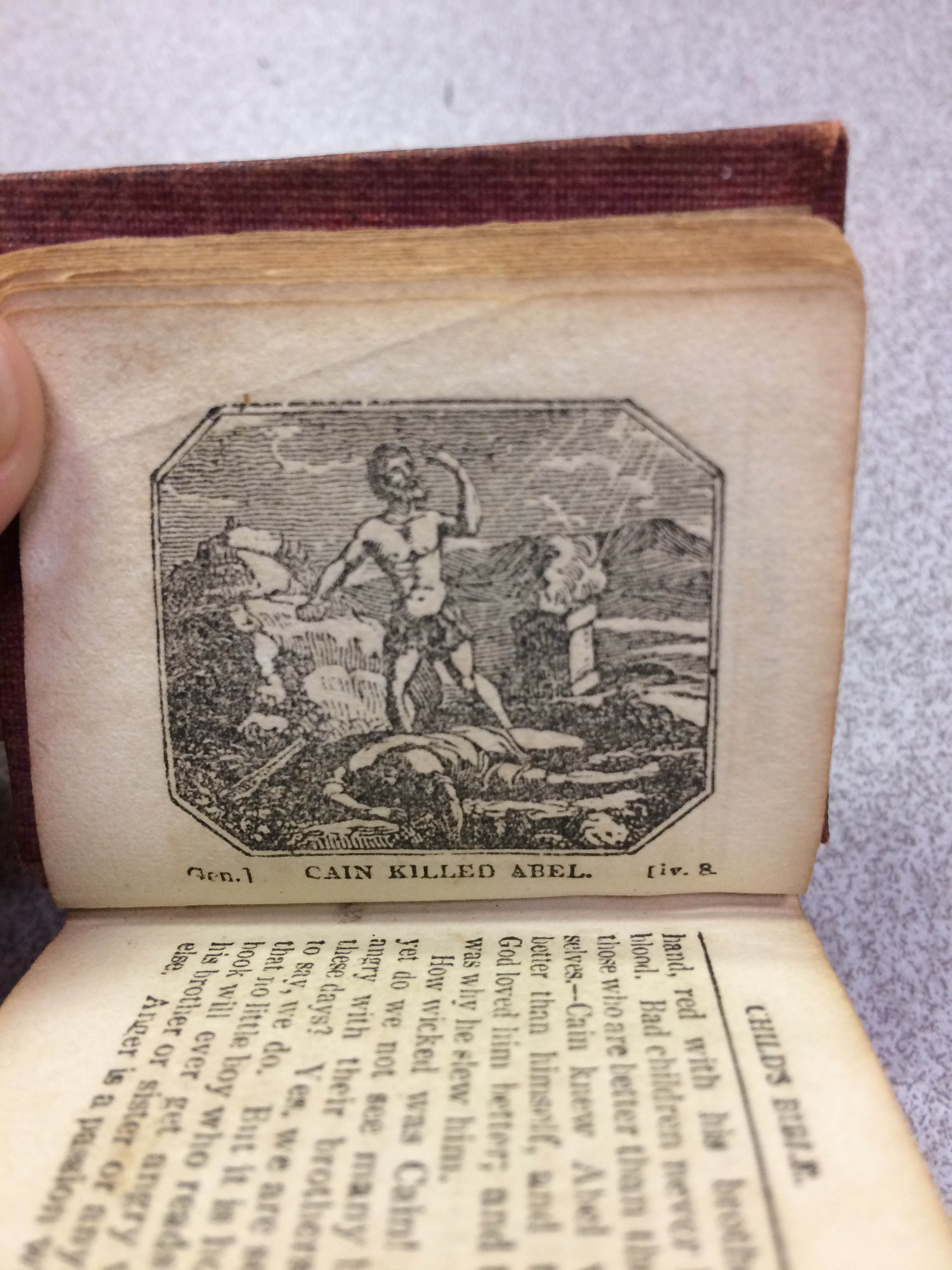