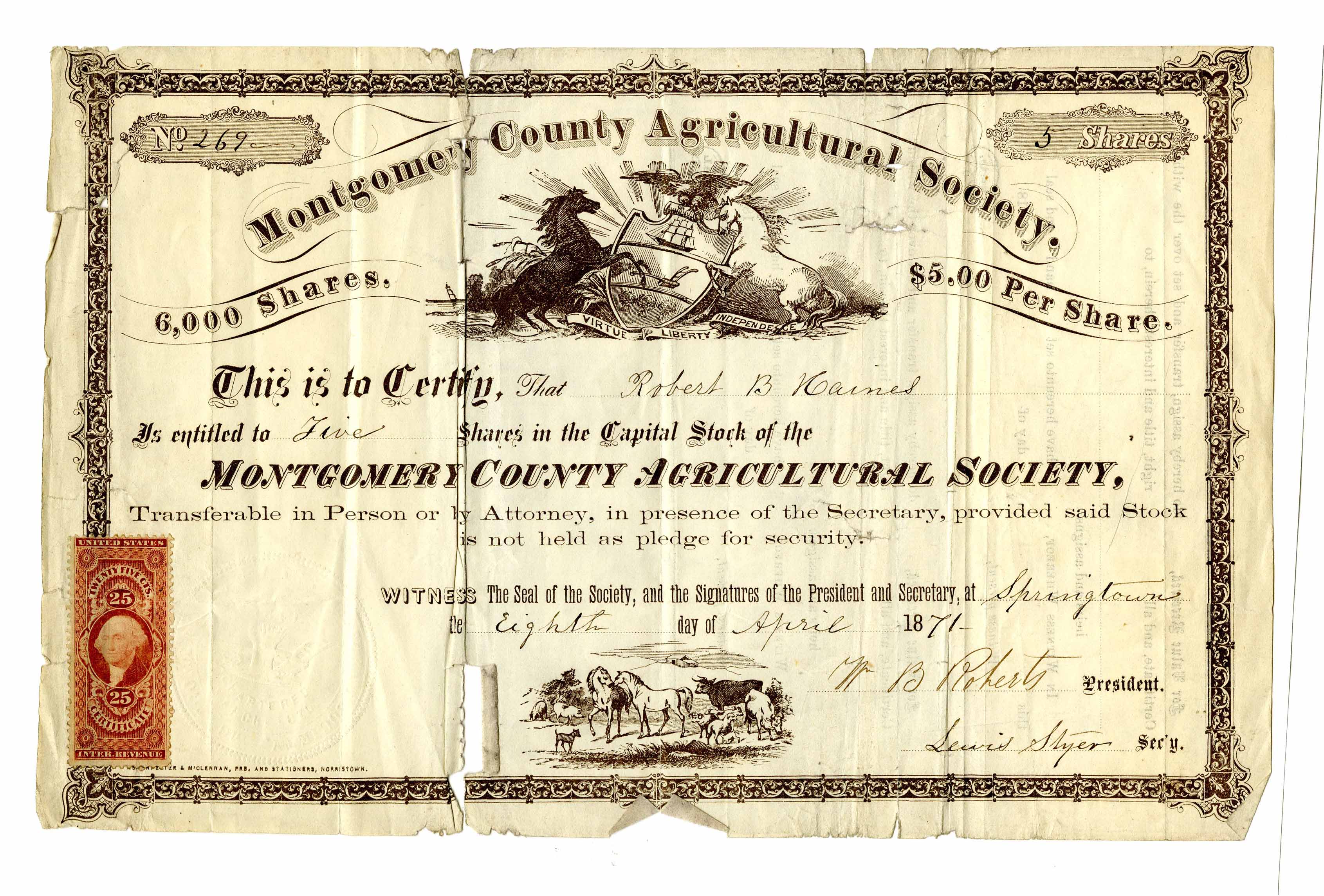 Last night I reached up to one of the highest shelves in the closed stacks at the Historical Society and took down a box labeled "Montgomery County Agricultural Society."  This box contains minute books and other records of the society which existed from 1850 until 1884.  Our records go from the group’s inception until about 1872. 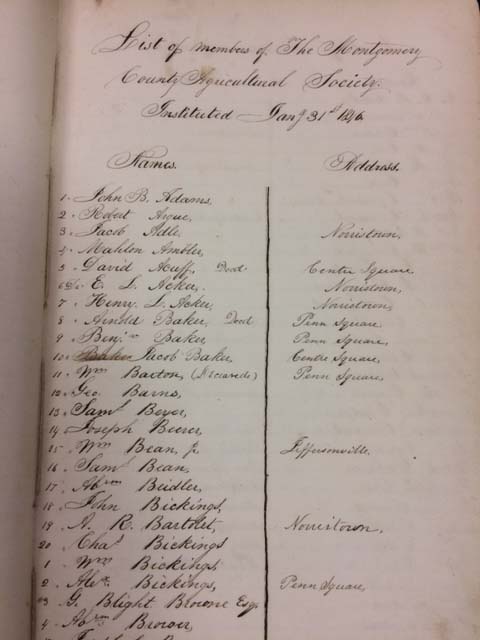 According to its constitution, the purpose of the society was “to cherish and promote Agricultural, Horticultural, and the domestic arts, and to disseminate scientific knowledge thereon.”  Annual dues were two dollars, and one could become a life member for a one-time payment of ten dollars.  The group was based in Springtown, the area around the intersection of Germantown and DeKalb Pike in East Norriton, and that was the location of its annual fair from 1850 until 1869.  It then restarted the annual fairs in Ambler. 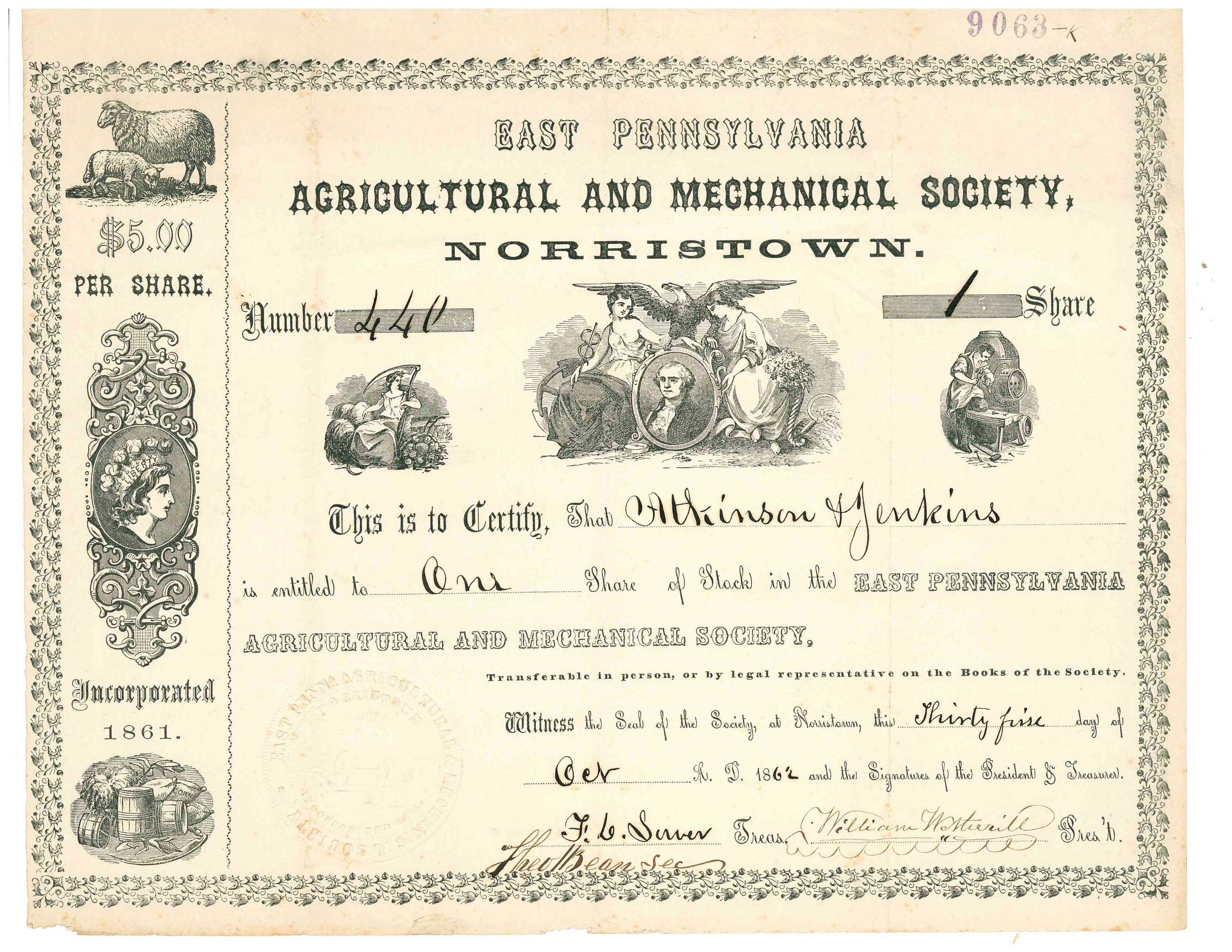 Ten years after the founding of the Montgomery County Agricultural Society, a similar group was founded in Norristown called the East Pennsylvania Agricultural and Mechanical Society.  It also held an annual exhibition.  According to a 1942 article in the Norristown Times-Herald, the Norristown farm exhibition was said to have better horse races, while the Springtown fair had better livestock and farm products. 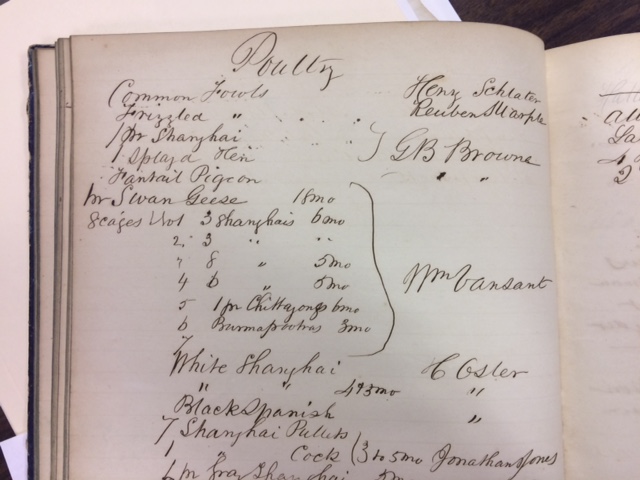 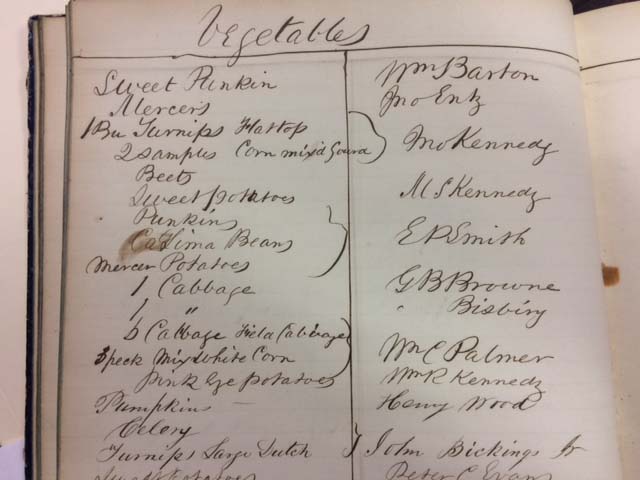 Records from the society's minute book.

In 1868, the two organizations attempted to merge.  At the January 2nd meeting, the Montgomery County Agricultural Society voted 55 to 51 to merge, but just a few days later, a group opposed to the merger protested that the slim majority represented only 1/8 of the membership.  They went to court to stop the merger. 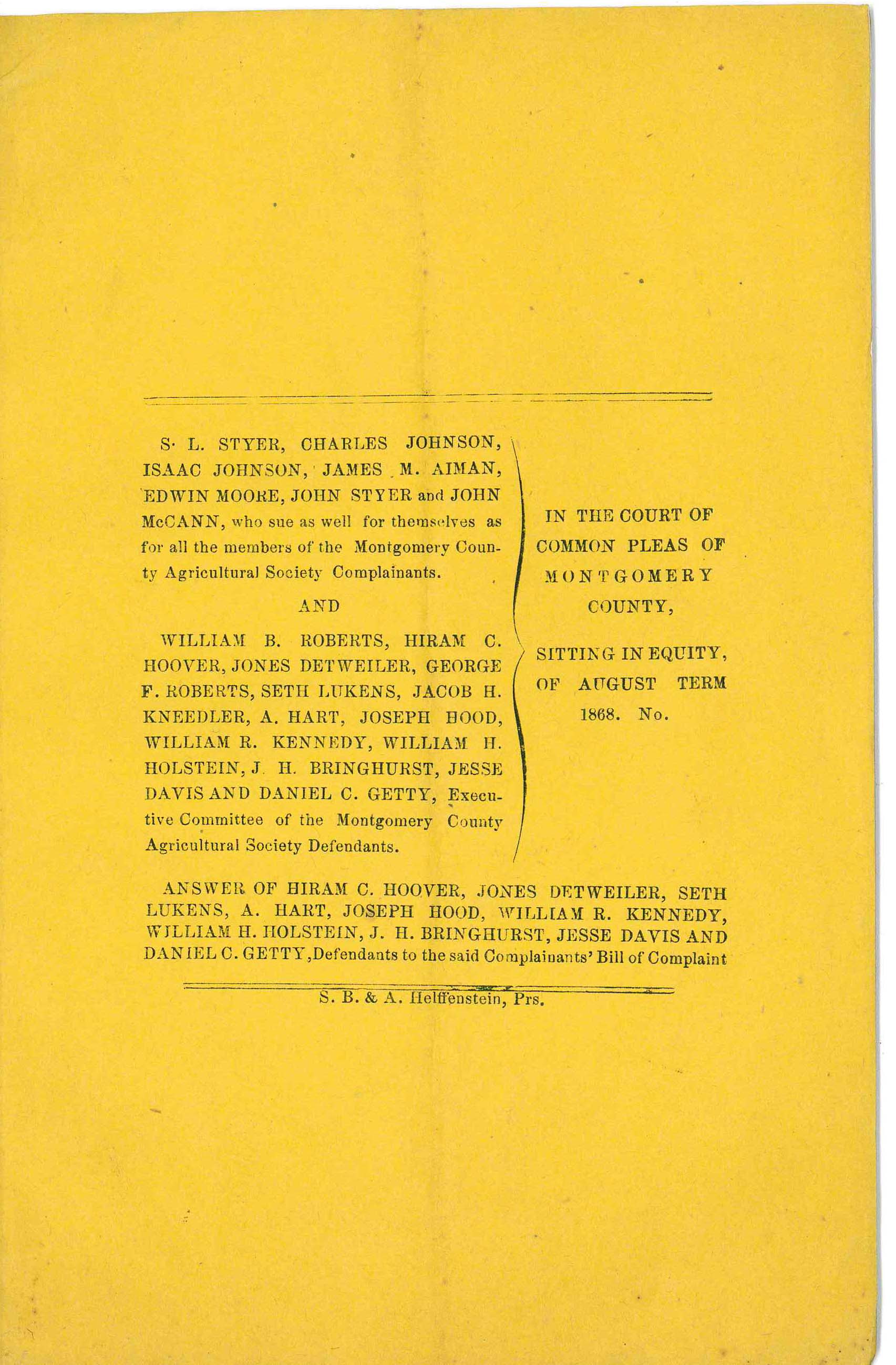 From the minutes it’s clear that the society’s finances were suffering at this time.  At the May 11, 1868 meeting, member Hiram C. Hoover motioned that the society’s property should be sold at public sale to pay the society’s debts.  After this meeting, however, there appears to have been a change in leadership, and the plans to merge with the Eastern Pennsylvania Agricultural and Mechanical Society and to sell off the property were abandoned.  The Society also rewrote its constitution. 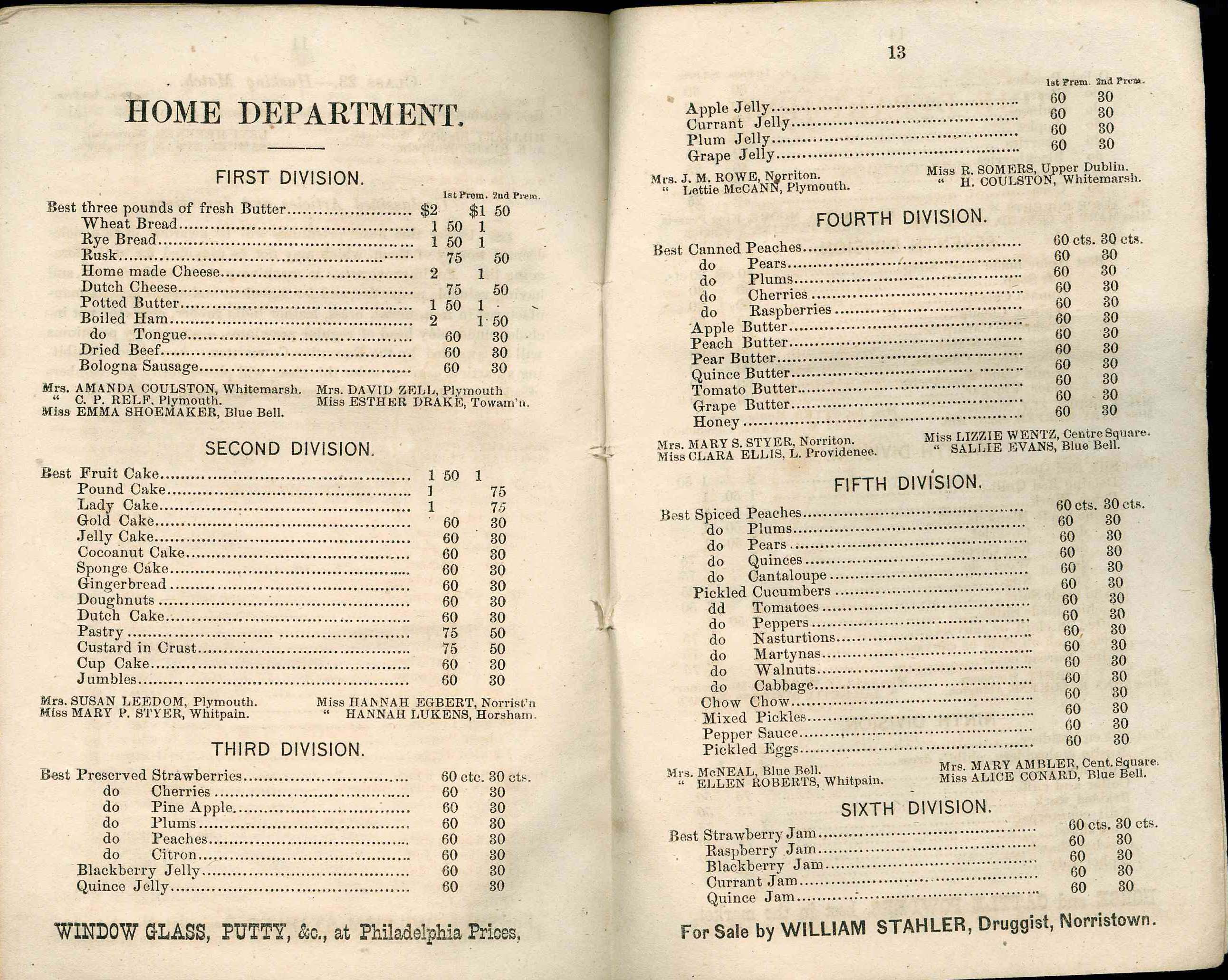 From the program of the 1869 fair, the last one held in Springhouse

In 1870 the society voted to move from Springhouse to Ambler, and the annual fair would be held there until 1884 according to "Norris” in the Times-Herald.  Our minute book ends with the meeting on August 12, 1872, but it looks like the Society ceased to exist after 1884.  The Eastern Pennsylvania Agricultural and Mechanical Society by then closed down, too, probably in 1877.