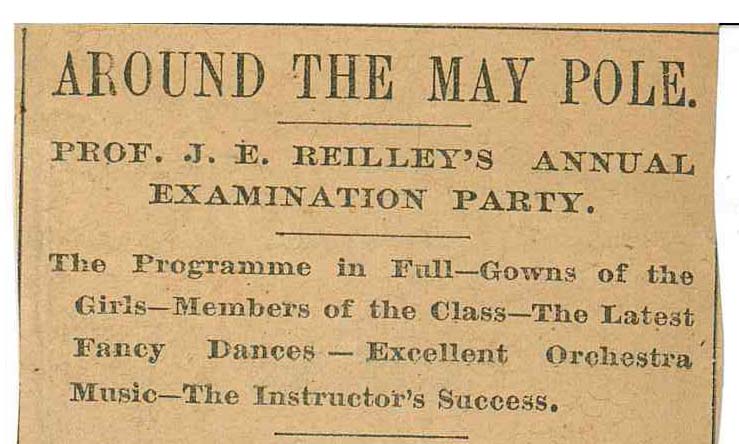 In the 1880’s, there was only one place to go for dancing instruction in Norristown, Professor J. E. Reilley’s class held weekly at Meeh’s Hall. Professor Reilley held his classes from September to May. At the end of May, the class would perform publicly for their final exam.

Below is an invitation to the 1888 event. 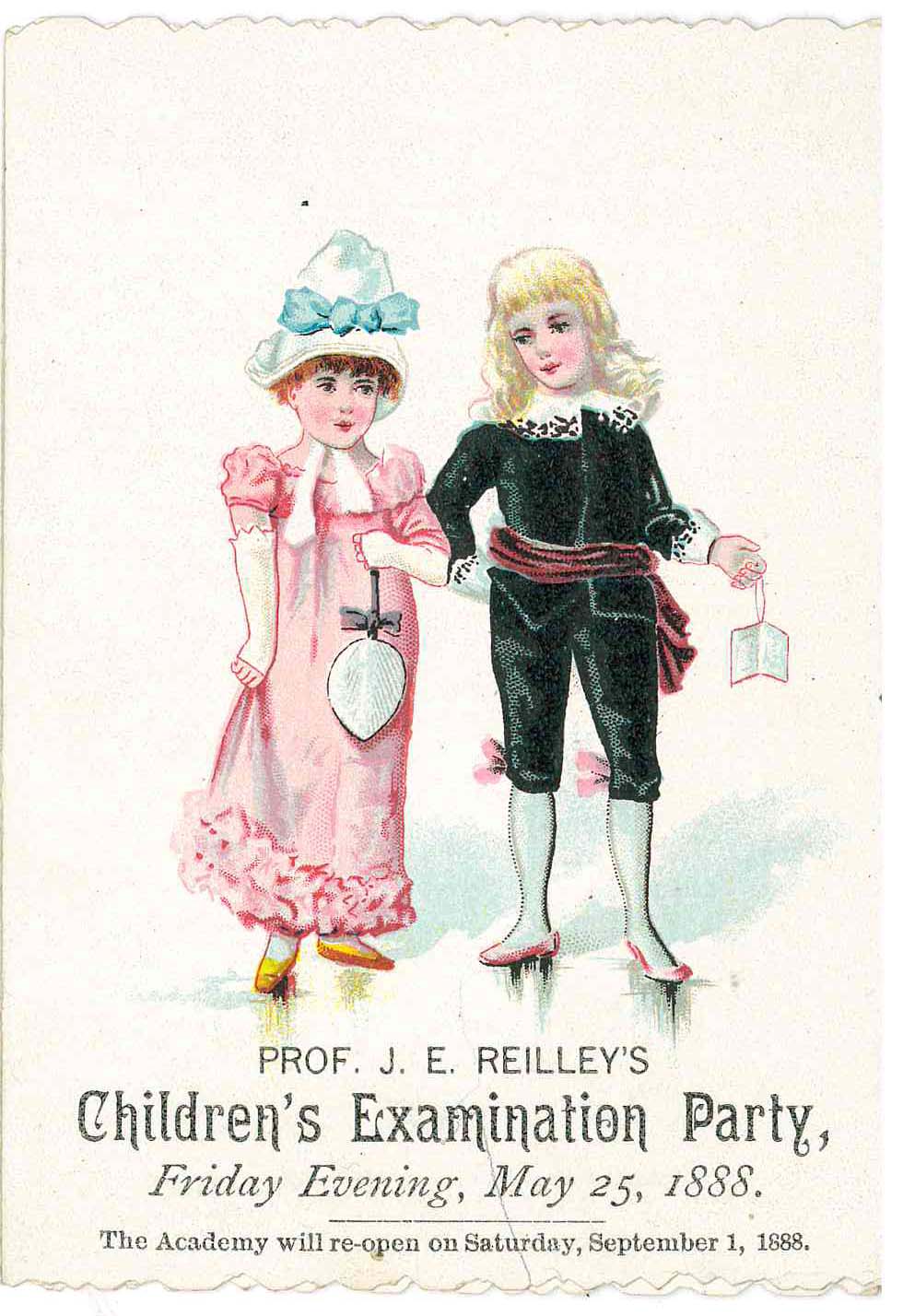 According to an accompanying newspaper article, 32 young ladies and 6 gentleman performed. The ladies are listed each with what they were wearing. Kathie and Emily Preston would blue Canton crepe trimmed with surah and lace while Miss Katie Haines wore pink chaille and garnet velvet.  The Preston sisters were later very active members of the Historical Society. Emily would have been about 13 in 1888 and Katherine about 15.

The program was long with several solos and group dances. Miss Alice Edmunds “one of the prettiest girls in the class” performed a scarf dance. Miss Eva McGinnis, dance “Comin’ Thro’ the Rye” while holding a bunch rye. The entire class danced around a maypole.

According to the newspaper, “The affair was a complete success, and Prof. Reilley is to be hearily congratulated for his good fortune with the pupils, and thanked for his painstaking care in their instructions.”

Reilley was born in the US to Irish parents, but I was unable to discover when he first came to Norristown. He continued teaching dancing until he died in Norristown in 1911.

The folks of Montgomery County have long enjoying dancing.  In 1830 a Mr. A. Bonnaffor advertised that he would offer dancing lessons two evenings a week in Norristown.  There would be live music and cotillons every other week.  The lessons apparently caught on.  One year later, the Norristown Contillion Party was organized by leading citizens of the borough.  According to Norris (Edward Hocker), many dances were held at the various assembly halls and later country clubs in Norristown and sponsored by different groups.

It all sounds like a good time, but not everyone was having fun.  Today, while looking through a box of material related to local Presbyterian churches, I came across this small booklet: 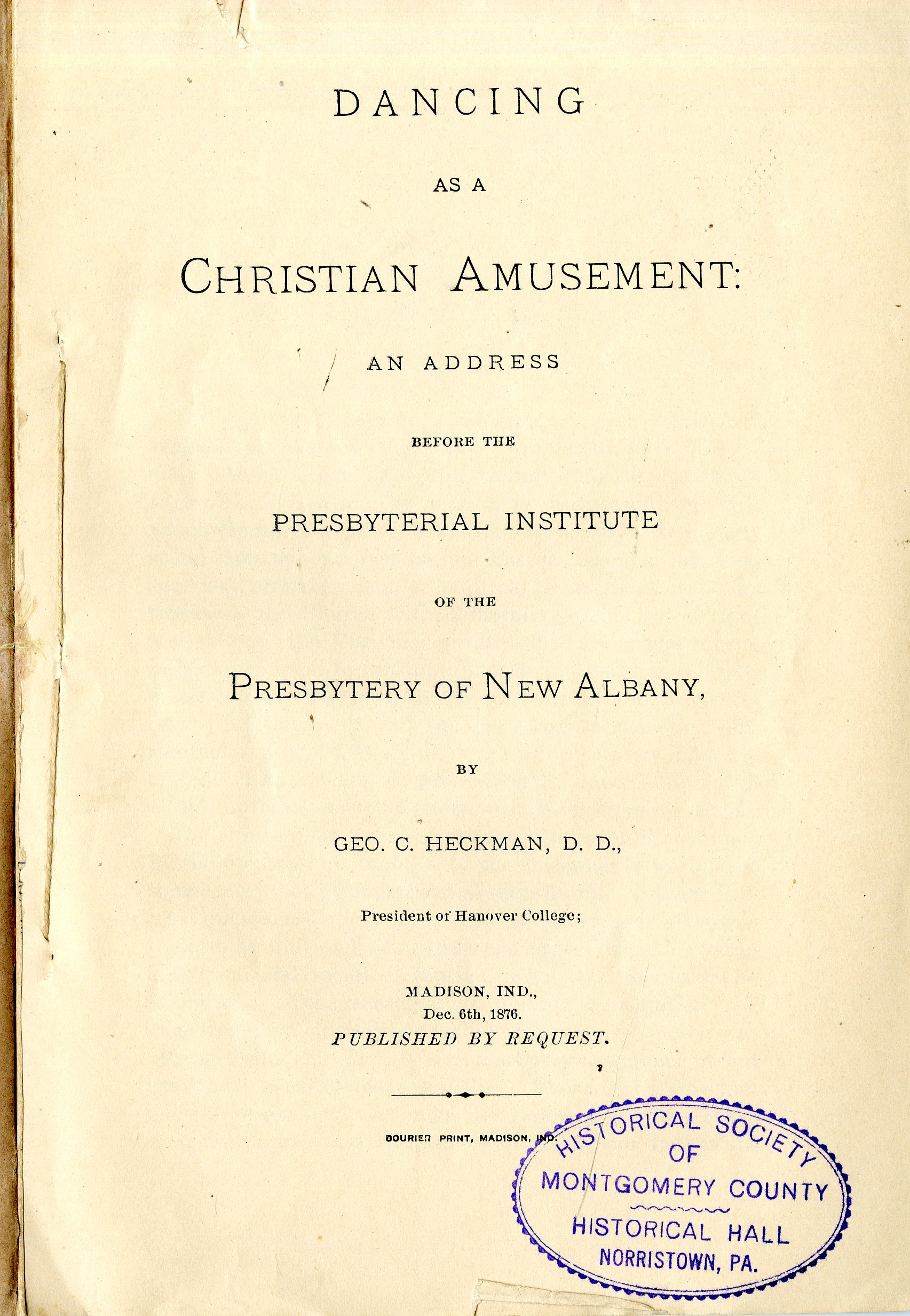 The Reverend Heckman was not a fan of dancing.  He's not against all dancing.  He writes, "The peasant-dances of sunny France and Spain and Italy are performed upon the greensward and under the pure exhilerating atmosphere of heaven." 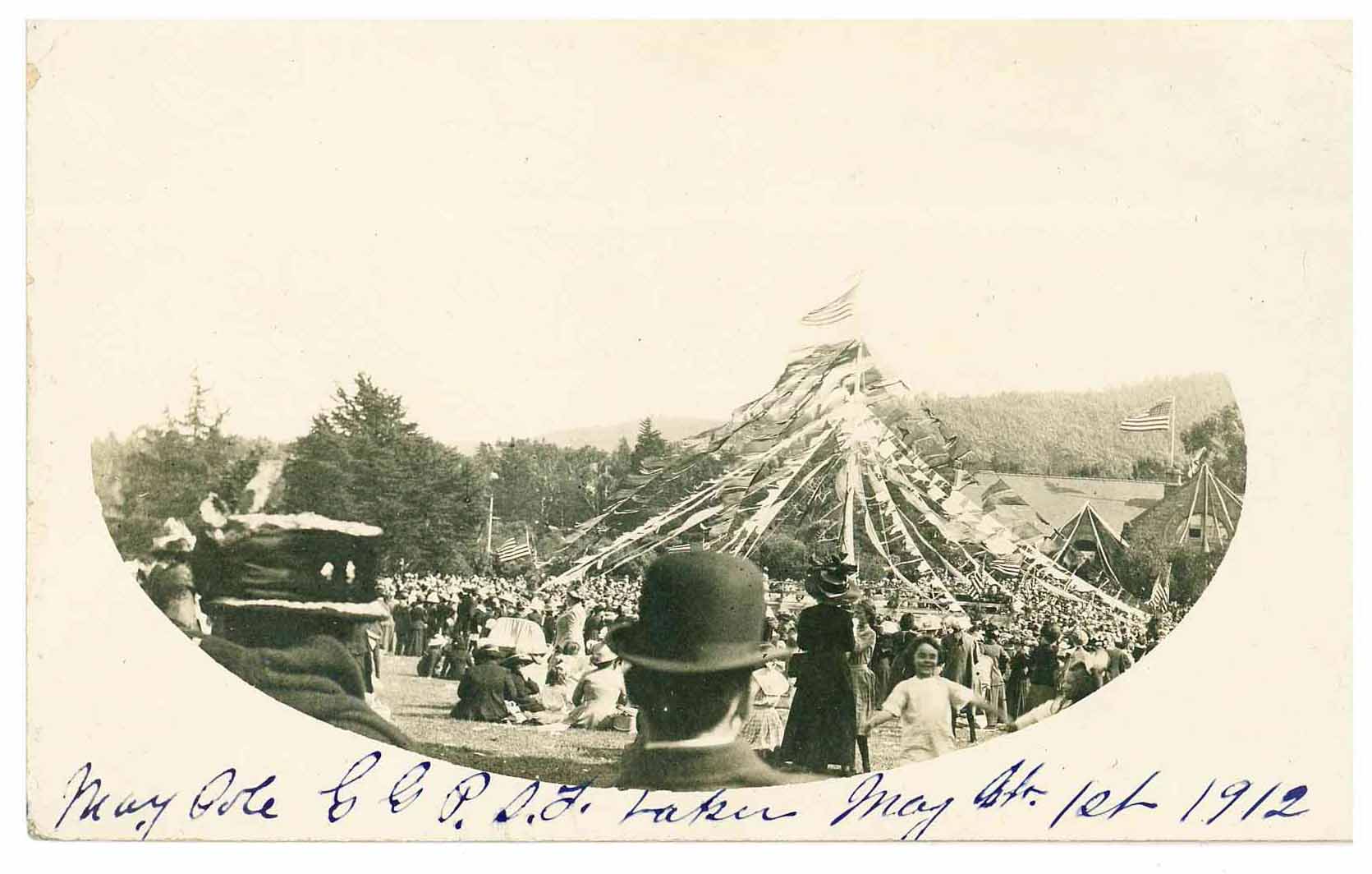 Dancing even Rev. Heckman could approve?

Dancing in modern (1876) America, however, was done in stuffy rooms and at night when people ought to be resting.  In addition to that, he writes, "The movement is unnatural, violent especially for women, producing unhealthful nervous excitement, quick inhalation of impure air..."

I don't have any pictures of dancers from the 1870's, but I have some from the early 1960's.  We should look at these for signs of unhealthful, nervous excitement: 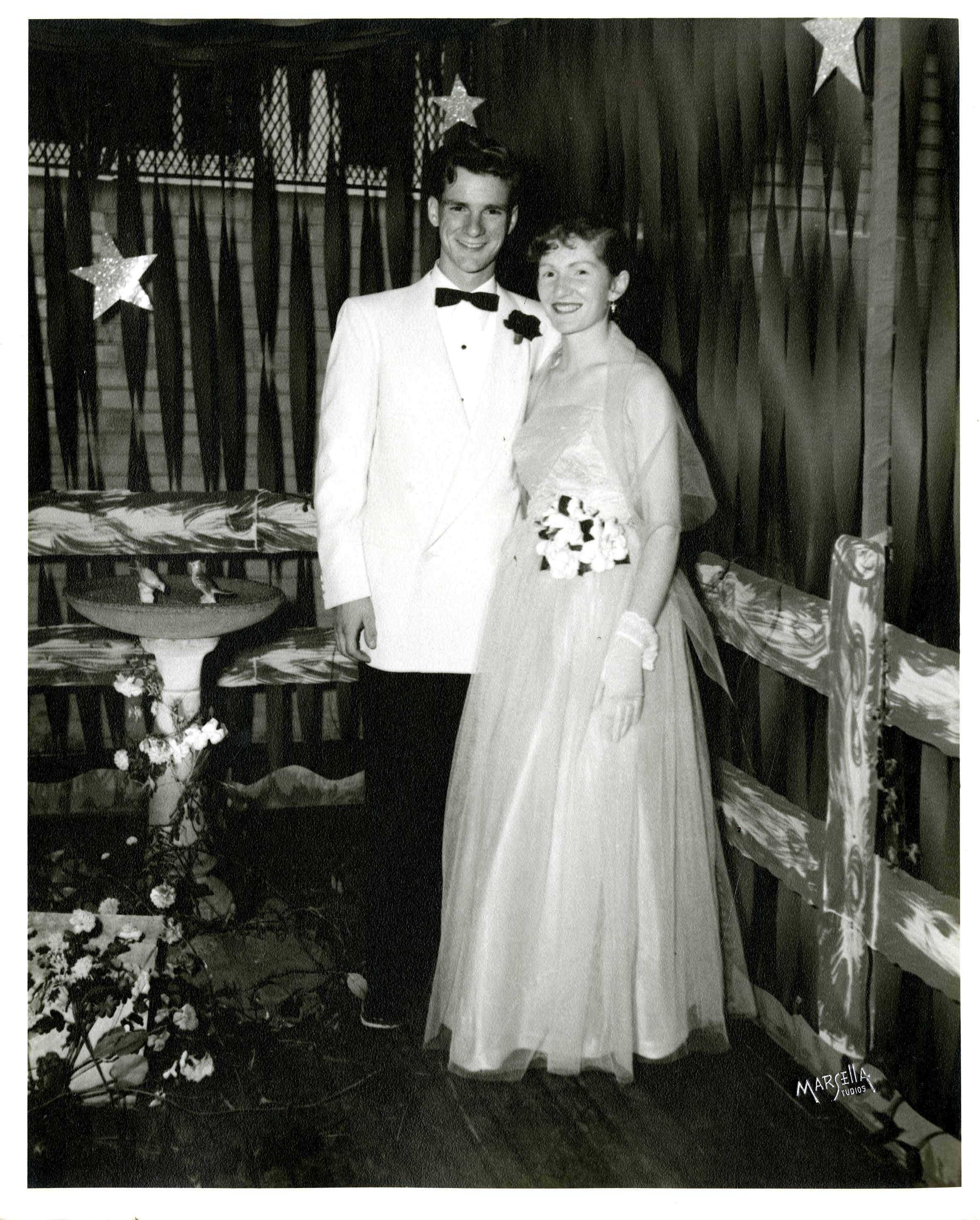 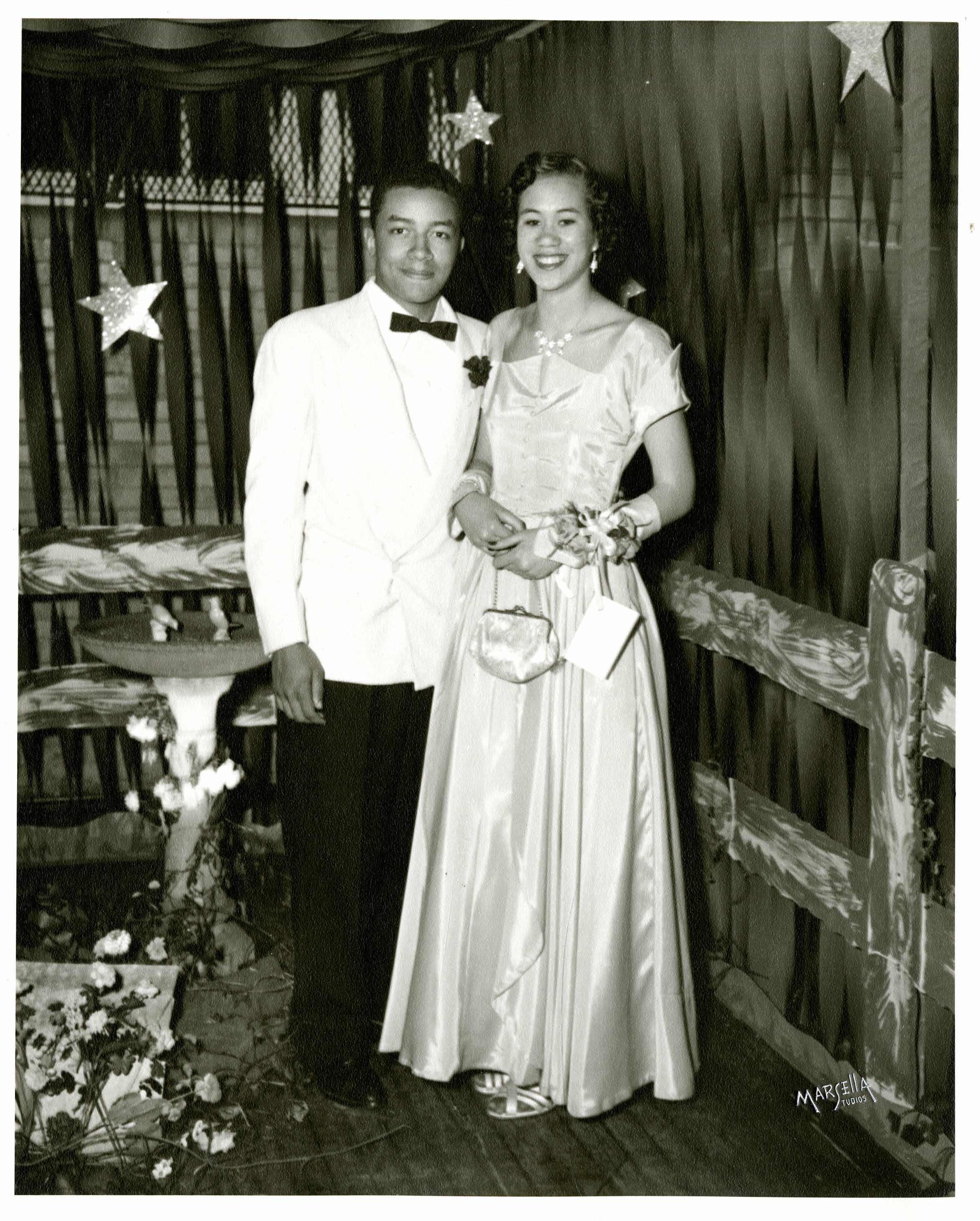 Hmm, I'm not seeing it.  Let's see what else Heckman has to say.  "This amusement awakens and indulges some of the worst propensities of the unrenewed nature, and interferes with intellectual and moral improvement....Hence dancing is one of the propeling forces which plunge men and women down to profligacy, ruin, and death." 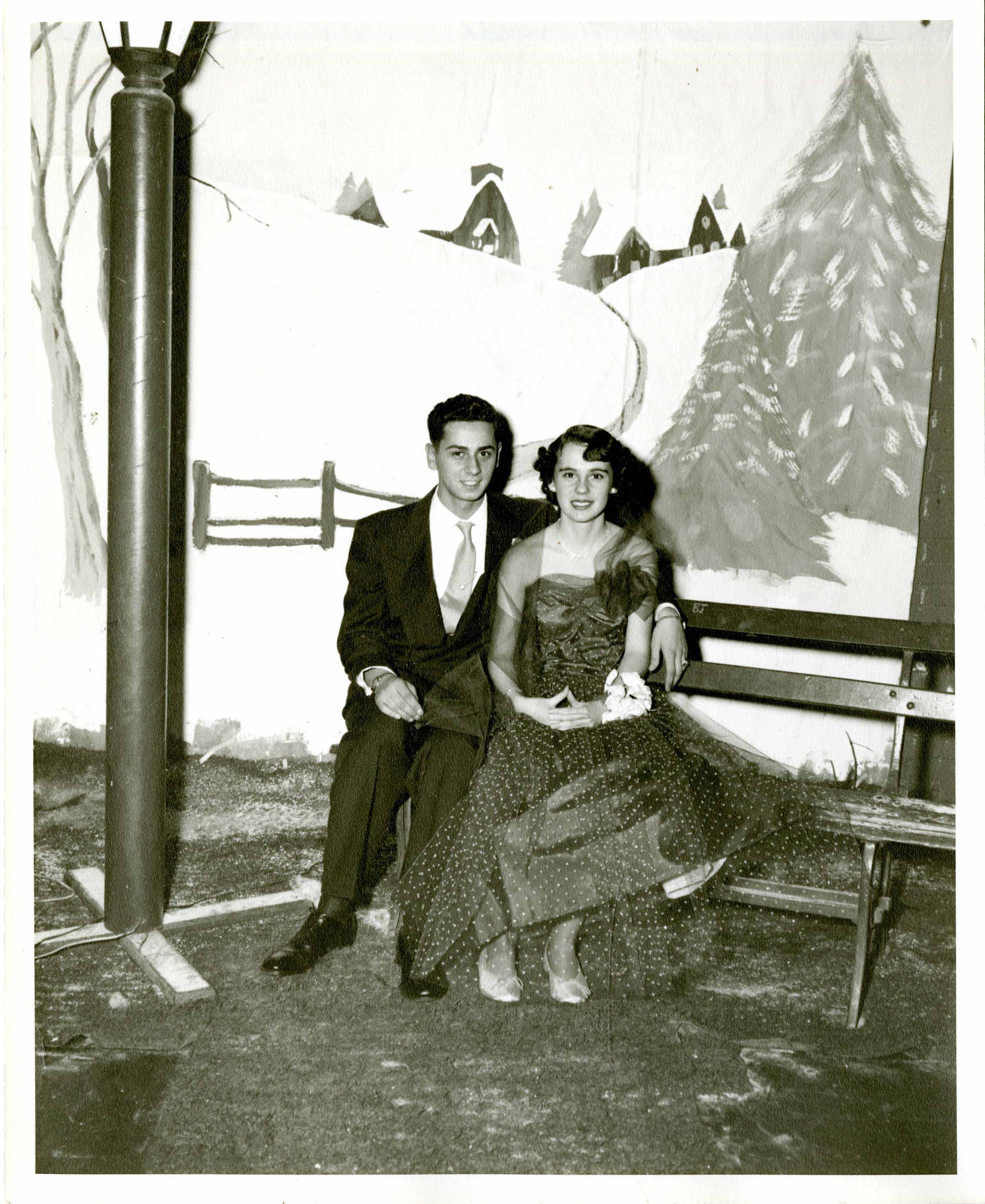 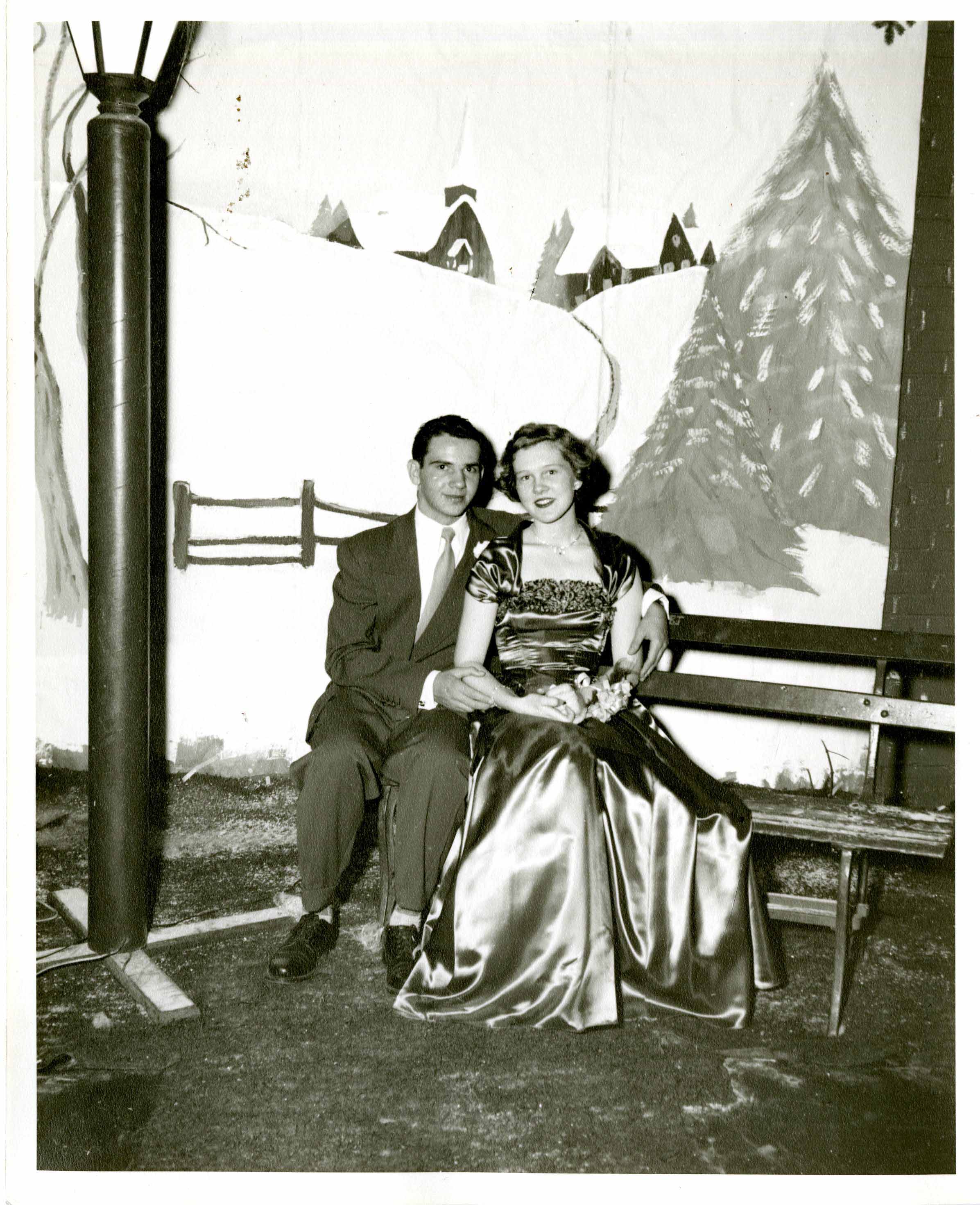 Interestingly, while Heckman claims, "I myself like to be amused and am easily amused," he does admit towards the end of his address, that he has never danced.  "By the gentle, patient, firm restraints and instruction of parental piety I have been preserved from the indulgence of this amusement, for which my manhood and maturer judgment give a devout mother sincere and loving gratitude.  Thus though without personal experience, I am sure these statements are right."

By the way, the prom pictures were taken by Marsella Studio, but the pictures aren't identified.  If either of these proms look familiar to you, let me know at This email address is being protected from spambots. You need JavaScript enabled to view it..