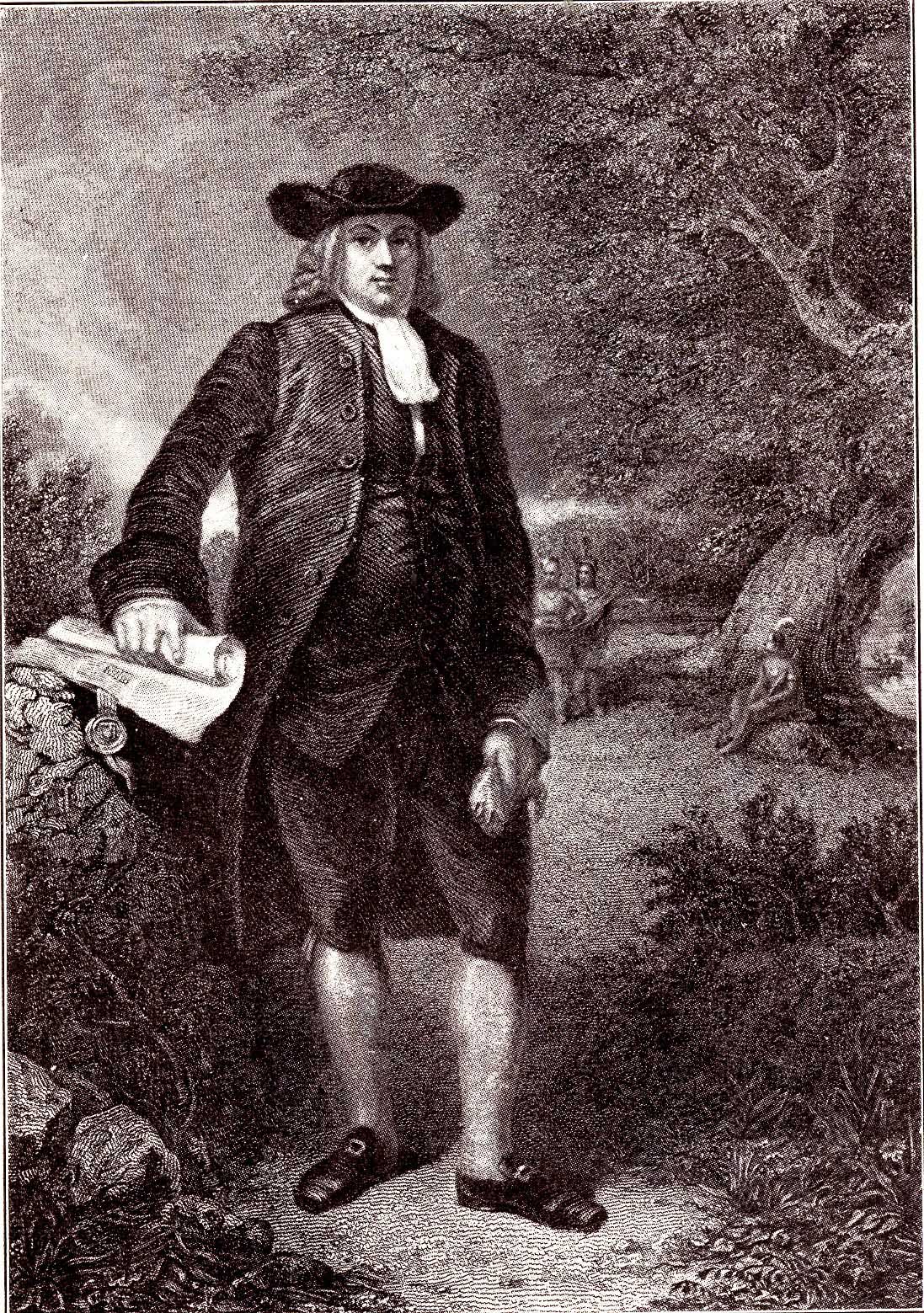 Everyone in Pennsylvania knows that Pennsylvania was founded by William Penn. Penn was a member of a religious minority which called itself the Society of Friends, but was more commonly known as Quakers. When Penn founded his colony in 1681, he meant to create a haven for his fellow Friends where they could live out Quaker values in peace.

The Society of Friends was founded by George Fox in the early Seventeenth Century in England. As a young man he had become dissatisfied with the existing denominations and came to believe that all individuals had God within them, something he called the “Inner Light.” Fox became an itinerant preacher, encouraging others to find their Inner Light. He and his followers believed that all individuals were called to be ministers, and all people, men and women, slave and free, were equal. Friends lived simply, foregoing luxuries and committed themselves to non-violence.

Almost immediately, George Fox was at odds with the law (it was actually a judge who gave the group the nickname “Quakers”). The group refused to pay the tithe to the state church (the Church of England) and refused to take oaths. They also stood out in the dress and actions. Here’s a description of an early Quaker from a 1916 booklet called “The Quaker of the Future Time” by George Albalton:

“He dressed without ornament, used the language of common life to all, doffed the hat to no man, no matter how high his position, became scrupulously honest in worldly business, refused oaths, avoided military service, contributed money liberally to help Friends in need, and with his time, counsel and energy, sought to relieve human distress.” 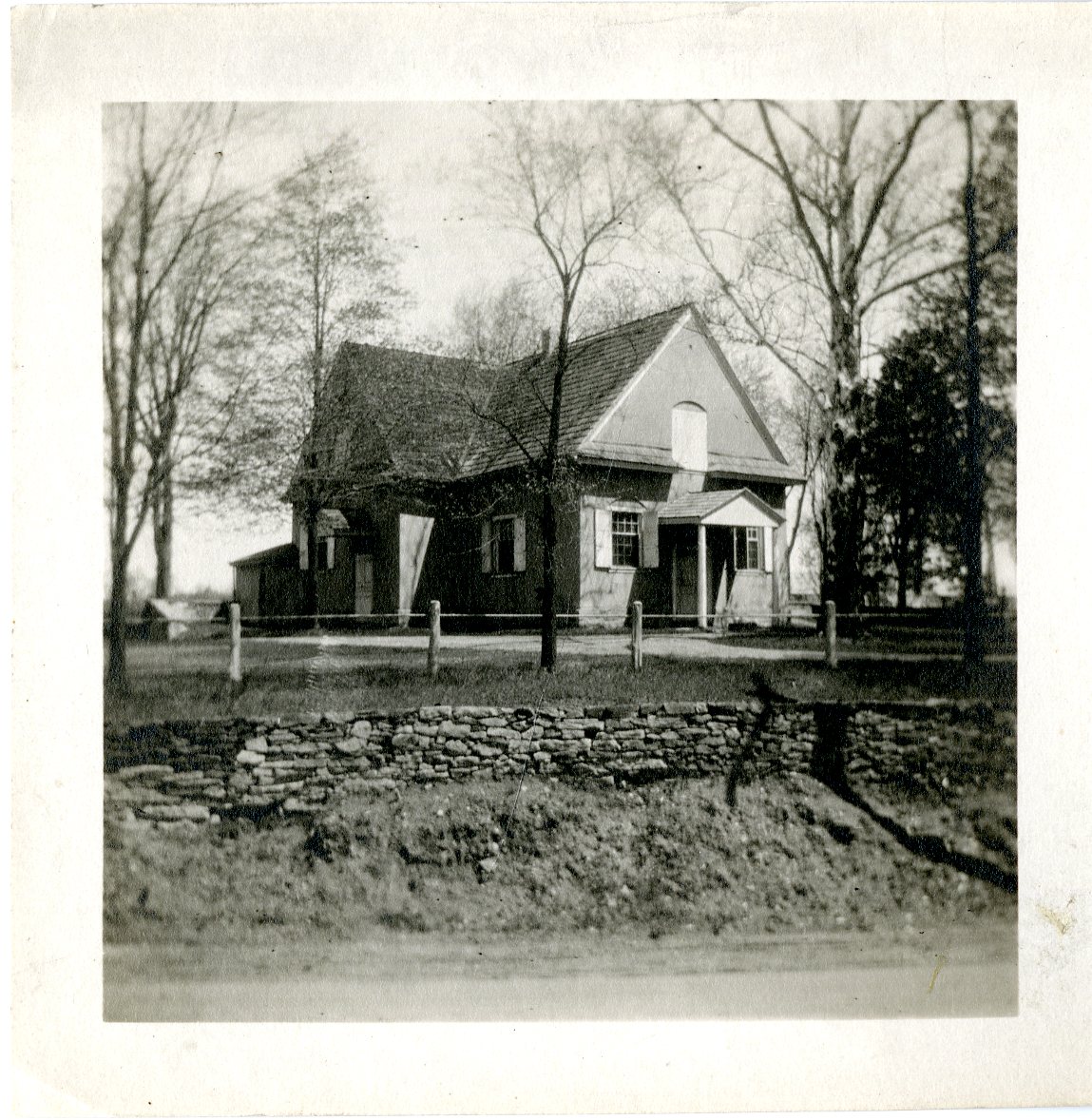 Reading this description, Quakers sound like a nice enough group. In fact, they were widely hated in England. And that’s why, William Penn, founder of our commonwealth, crossed the ocean to establish a place where Quakers could be free.
Many early settlers of Montgomery County were Quakers, who started meeting for worship in people’s homes before building early meeting houses in Plymouth, Abington, Gwynedd, and Merion. Those early Quakers did stand out from other settlers in how they spoke and how they dressed.

Quakers rejected ostentation in a very ostentatious time. Here is King Charles I by Van Dyck: 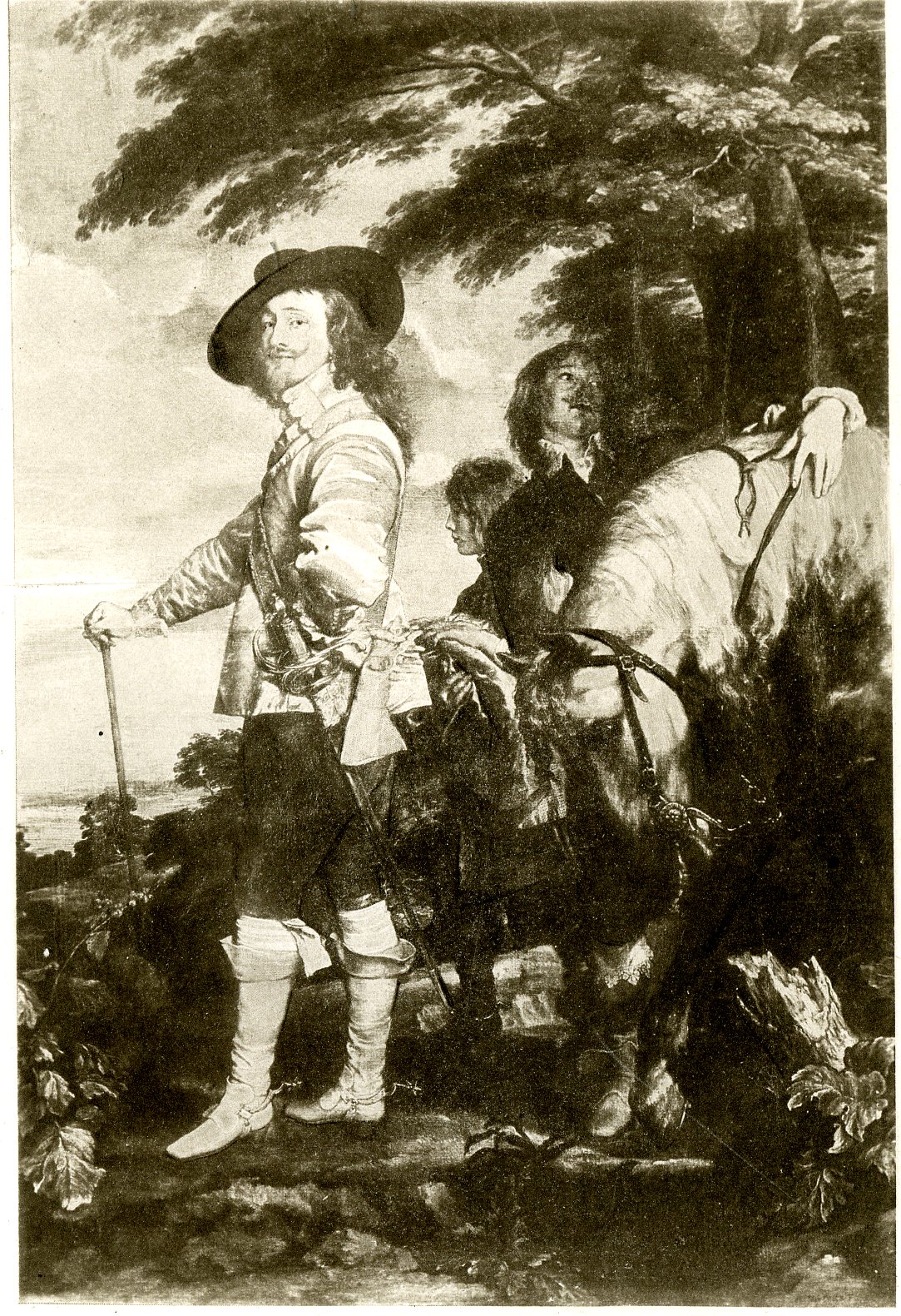 And here is his subject, George Fox: 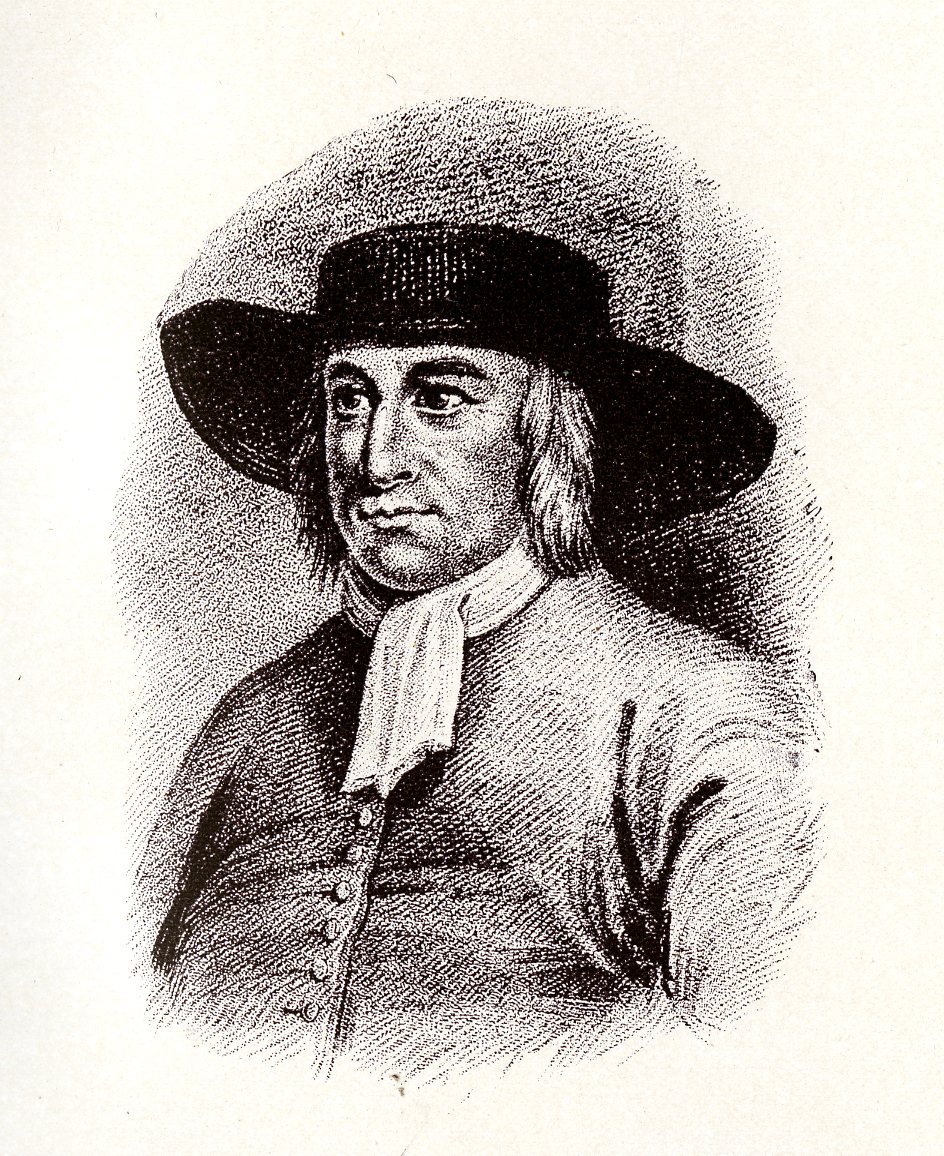 Both these images and the one of William Penn at the beginning of the post are from Amelia M. Gummere’s book The Quaker: A Study in Costume.

Quakers did not wear wigs or lace or feathers in their hats. They wore plain wool and linen clothes in muted colors. The black, wide brimmed hat (think of the guy on your oatmeal) that characterized the male Quaker was never removed in the presence of his “superiors” because, to the Quaker, all people were equal. For the same reason, they did not use titles when addressing others.

In our modern times, men don’t wear hats and millionaires wear blue jeans, so these Quaker peculiarities don’t seem controversial to us. The Quaker “Plain Speech” no longer seems shocking either. If you ever read or watched Shakespeare, you’ve probably noticed that English used to have formal and informal forms of “you” as Spanish, French, and several other languages do. Quakers addressed everyone as “thou” instead of the more formal “ye.” Today, most Quakers speak like everyone else, but a modern person might wonder why this was ever considered a big deal. 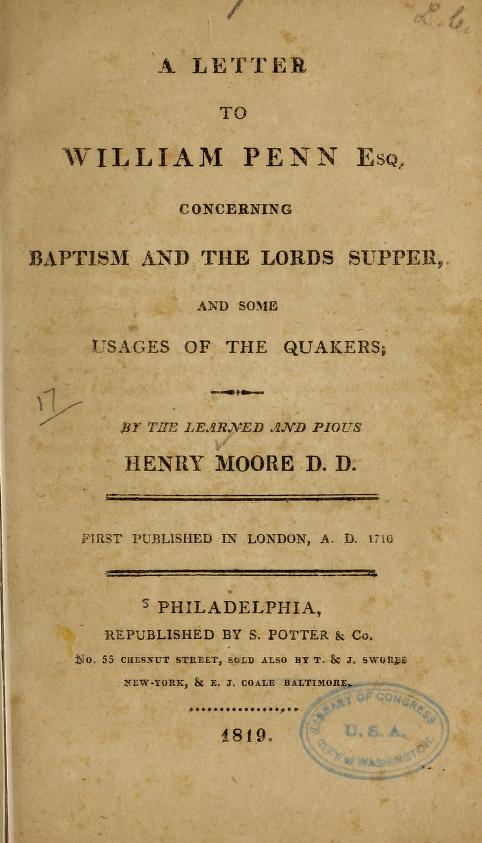 But it was. In our collection at the Historical Society, we have an 1819 reprint of a letter originally written in 1710 by Henry Moore, a minister of the Church of England to William Penn. The letter is an excellent example of polite disagreement. He begins by praising Penn’s book No Cross, No Crown. The better part of the letter, which runs to 36 pages in printed booklet form, concerns the Quaker rejection of baptism and communion (the Lord’s Supper, as Moore calls it). In the last few pages, Moore addresses what he calls “Cap-honour and Titular respects.” He writes (I’ve retained his capitalization):

“If the apostles could comply with the Jews in some Mosiacal rites, that the coming of Christ had abrogated, that they may not give offence to the Jews,; how much more ought christians, for the avoiding of offence, comply with one another in such customs as no law, neither human nor divine has yet abrogated?”

Others were less respectful than Moore in their disagreements with Quakers. Even after the Toleration Act was passed in England in 1689, Quakers were widely disliked in England. The New World outside of Pennsylvania was not much kinder. Massachusetts Bay Colony imprisoned and banished Quakers as heretics. Roger Williams (founder of Rhode Island and champion of religious liberty) famously challenged George Fox to a debate. Fox did not respond to the challenge, though other prominent Quakers did. Williams also wrote a book titled, George Fox Digged out of His Burrowes attacking Fox’s idea of the Inner Light.

As the centuries went on, however, people came to admire Quaker honesty in business dealings and generosity in charity, and came to see their habits as merely quirky instead of heretical.

Today, few Quakers will address you as “thou” and fewer still wear the plain dress of their ancestors. Although you can still find a few who continue these traditions.  You can check out this blog by Quaker Jane for more information.

Read 30617 times
Tweet
Published in Found in Collection
Tagged under

More in this category: « Matsonsford Bridge Mt. Zion and the Roberts Family Burial Ground »
back to top