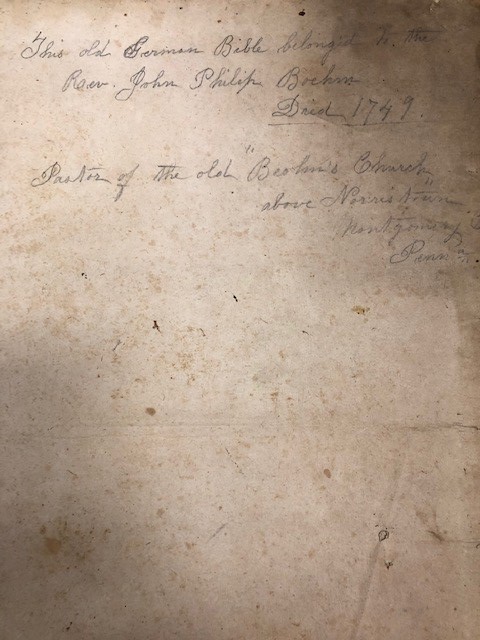 While wandering around the upper stacks looking for my next project, I came across an old Bible with a tag that claimed it was once owned by John Philip Boehm, founder of Boehm’s Church in Blue Bell. 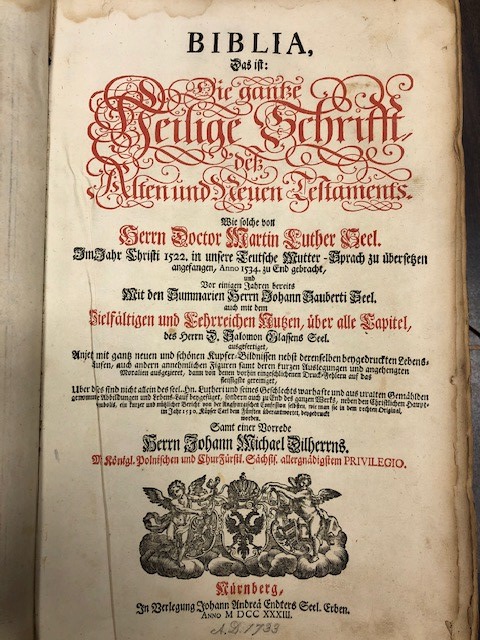 Title page from the Bible

This massive book was published in Nuremberg in 1733. The Bible has many illustrations and additional material. Like most of the 18th and 19th century German Bibles in our collection, this one was translated by Martin Luther, and it includes an illustration of Luther and a biography. There are also brief biographies of the rulers of Saxony, the German state that protected Luther from the Holy Roman Emperor starting with Friedrich III or Wise. There is also an index of names and a chronology of events in the Bible. 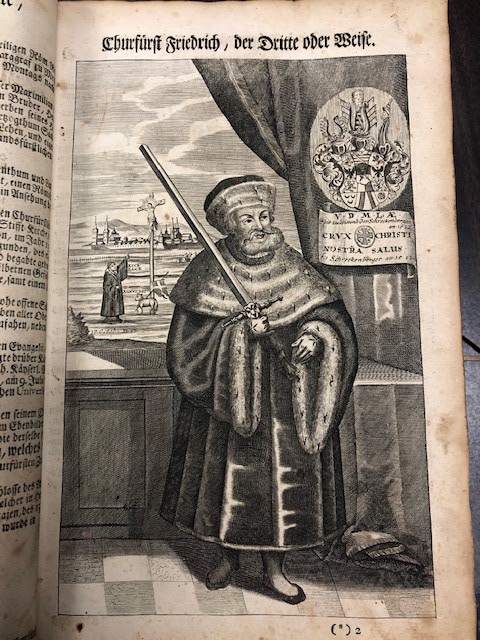 An illustraion of Friedrich III 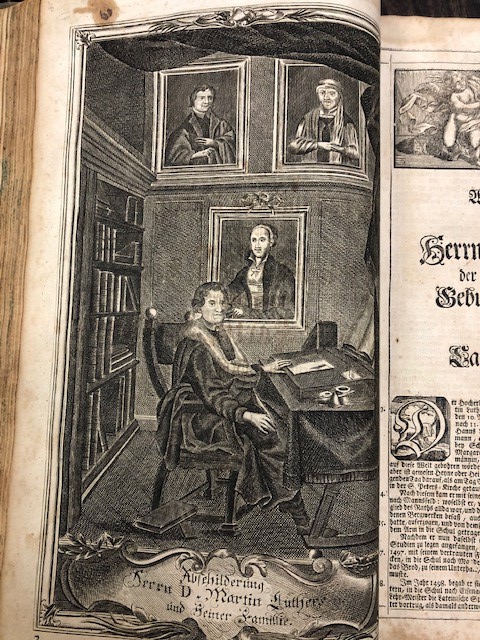 The man who owned the Bible, John Philip Boehm, was born in 1683 in the town of Hochstadt (now part of the city of Maintel) in Germany. His father was a minister in the Reformed Church (the Reformed churches followed the teachings of John Calvin). The young John Philip Boehm was an innkeeper and later a teacher at Reformed schools in Worms and Lambsheim. In 1720 he emigrated to Pennsylvania where he became a farmer. One of our books on Boehm says that he left because he was persecuted by Catholics, but the much more detailed book Life and Letters of the Reverend John Philip Boehm, says there was a dispute in Lambsheim over the use of land by ministers and schoolteachers, and that the Catholic schoolmaster joined Boehm in protesting the town’s policy.

Really, we don’t know exactly why Boehm left Germany, but in 1720 he begins to appear in Pennsylvania records. At that time, the German population of Pennsylvania was increasing, but there were no Reformed ministers in the area. Some joined other churches or worshipped with Quakers, but when the well-educated Boehm arrived, his neighbors asked him to serve as their minister. Boehm demurred because he wasn’t ordained, but after five years of asking, he gave in and began preaching in three places: Skippack, Faulkner Swamp, and Whitemarsh.

This led to problems a couple of years later when a Reformed minister arrived from Europe and ordered Boehm to end his ministry. In response, Boehm and his supporters contacted the Dutch Reformed Church in New York. The New York ministers forwarded his request for ordination their leaders in Amsterdam, who recognized Boehm’s ministry and gave permission to the New York ministers to ordain him. 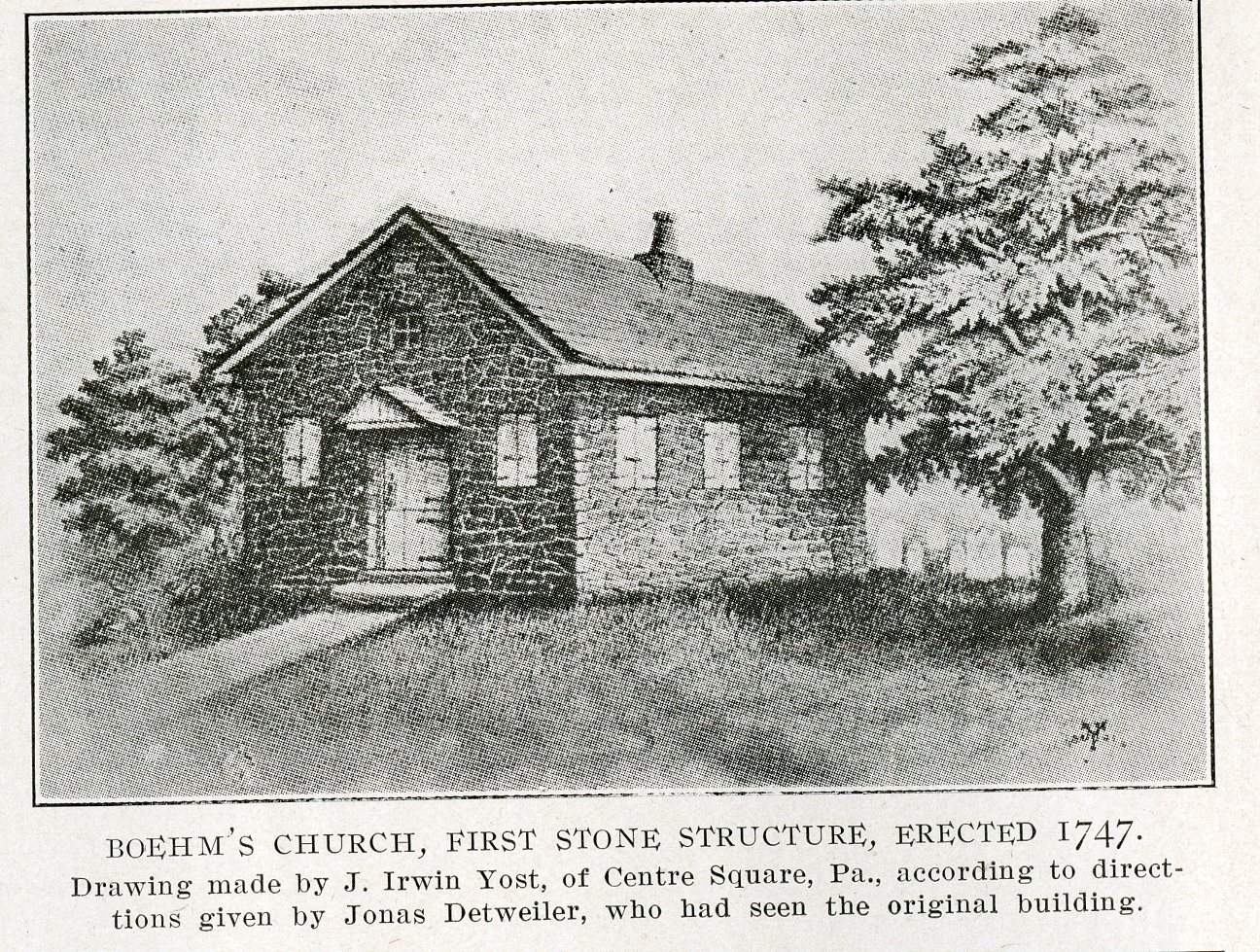 Boehm was actually the founder of several congregations in southeastern PA, and the one known as Boehm’s Church (pronouned "beems") was his last. According to the church’s website, as Boehm got older, traveling to all the different churches became more tiring. In 1847, a small stone church was built near his farm in Whitpain. 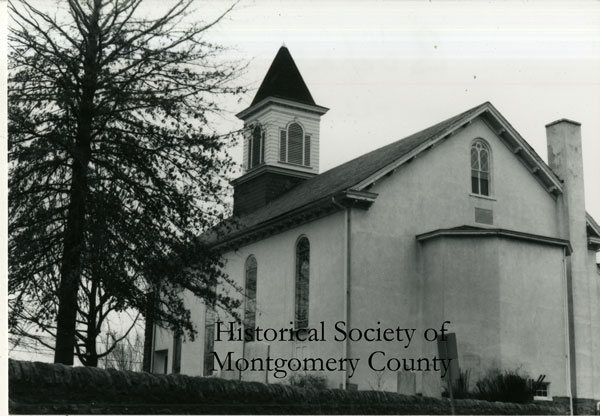 Boehm's Church, now a United Church of Christ, continues his ministry to this day.

Hinke, Rev. William J., Life and Letters of the Reverend John Philip Boehm (Philadelphia: Publication and Sunday School Board of the Reformed Church in the United States, 1916)

More in this category: « The DeKalb Street Bridge Fire Transactions of the American Philosophical Association »
back to top