Shortest Term and the Philadelphia Eagles 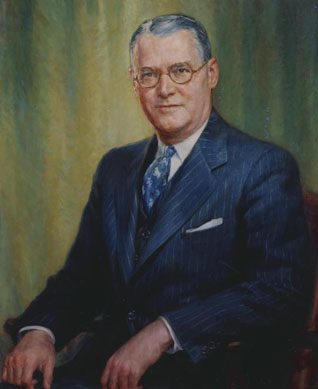 Born in Wynnewood, John C. Bell Jr. had the distinction of serving the shortest term as governor. When Governor Martin was elected to the U.S. Senate in 1946, he was forced to resign his governorship twenty days before the end of his term. Bell, who was lieutenant governor at the time, was sworn into office the day after Governor Martin resigned. Since Governor Bell only served for nineteen days, there were no landmark laws or events that occurred. His job was to keep the state government operating until the next elected governor, James Duff, took his oath in January 1947.

Bell continued to serve the public after his short term. In 1950, Bell was appointed to the State Supreme Court. He often dissented from liberal court decisions, especially with decisions regarding defendants’ rights. He became Chief Justice in 1961 and served on the court until his retirement in 1972.

Lastly, an interesting side note for all our football fans. John Bell Jr.’s brother Bert Bell was owner of the Philadelphia Eagles and NFL Commissioner from 1946-1959.