What Killed Downtown? Norristown, Pennsylvania, from Main Street to the Malls – by  Michael E. Tolle 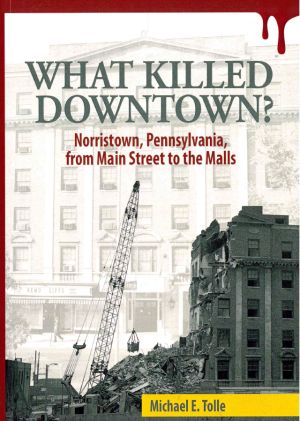 In 1950, the classic American downtown of Norristown, Pennsylvania, centered on the six blocks of Main Street, was the bustling commercial heart of central Montgomery County, and had been for over a century. With depression and war in the past, downtown merchants looked forward to an extended period of prosperity. It was not to be.

However, by 1975, downtown's core had collapsed: 65% of its businesses had moved away or closed, the store fronts stood largely shuttered and deteriorating, with 99 vacant and countless others lost to the wrecking ball, as first shoppers and then the merchants fled Main Street. Montgomery County: The second Hundred Years, described downtown Norristown as “a scene of quiet desolation”. What happened during those 25 years and what’s to blame for the decline; the Malls, Municipal government, the Downtown Merchants Themselves, or was it something else more fundamental?