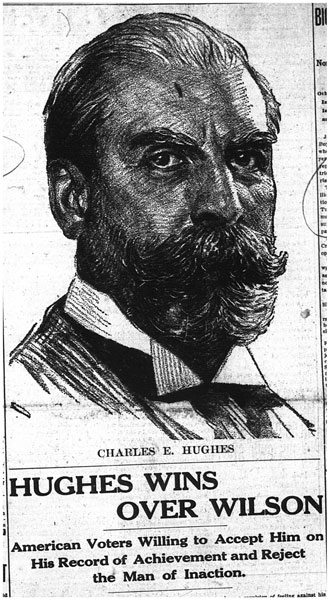 Last week I was scrolling through old Times-Herald’s for a research request, and I discovered this interesting headline.

In 1916, incumbent Woodrow Wilson was running against Supreme Court Justice Charles Evans Hughes. Since the Civil War, Republicans had dominated the White House, Grover Cleveland’s two terms being the only ones for a Democrat between Abraham Lincoln and Wilson. Wilson was able to win the presidency because of a split in the GOP between the progressives (led by Theodore Roosevelt) and the more traditional Republicans led by President William H. Taft.

Charles Evans Hughes was governor of New York from 1907 to 1910 when President Taft nominated him for the Supreme Court. At the Republican Convention of 1916, Hughes was a compromise candidate between the Roosevelt and Taft contingents. He was highly regarded for his intelligence and moderation. Many believed that if the Republicans could unite behind Hughes, he would defeat Wilson.

The Daily Herald, as the paper was known at the time, was staunchly Republican. Notice on these instructions for voting, not only is the Republican box marked, but the other three parties (Democrats, Progressives, and Socialists don’t even appear!). 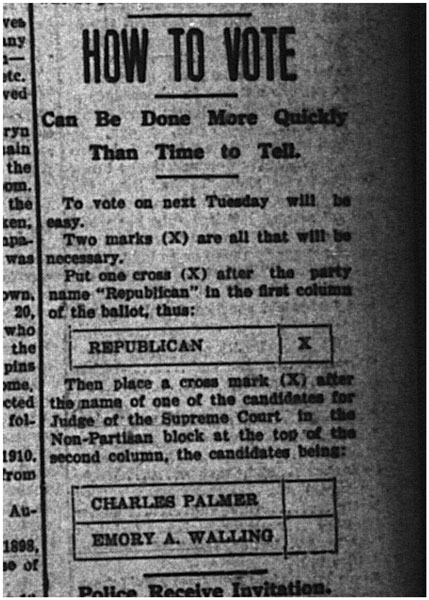 It heavily promoted Hughes as well as the local Republican candidates in both its articles and its advertising. This reflected Norristown and Montgomery County’s political tendency. Remember, not even native son and Democrat Winfield Scott Hancock won in Montgomery County. 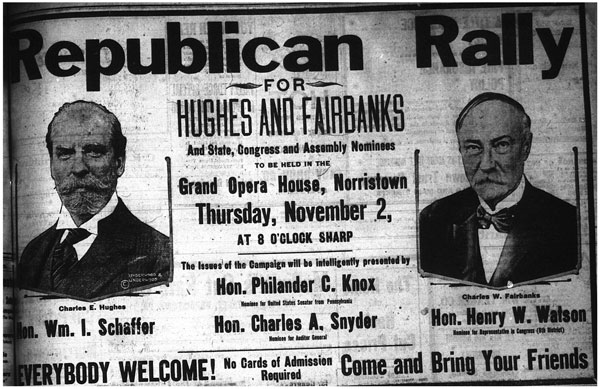 The paper's gung-ho Republicanism and the general feeling that Republicans would unite behind Hughes led to the Herald’s “Dewey Defeats Truman” moment. It was not the only paper to declare Hughes the winner as he led in the early returns. But Wilson carried the Solid South and a few swing states, including California.

The Herald reported the uncertainly on Thursday, November 9, and a special edition later that day declared Wilson the winner. On Friday, it ran Wilson’s picture (smaller than Hughes). 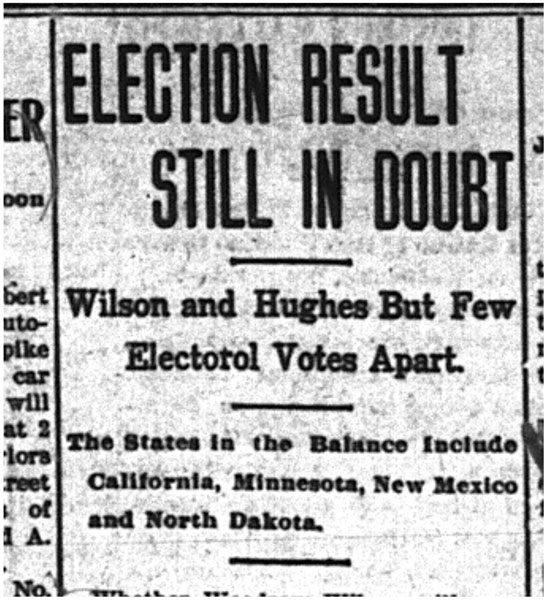 The Ardmore Chronicle, a weekly, ran a large picture of Hughes in its last issue before Election Day. A week later, it reported the election still up in the air although the Herald had reported Wilson the winner two days before. 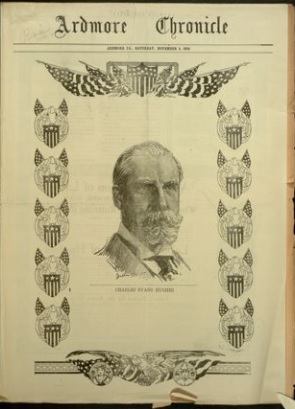 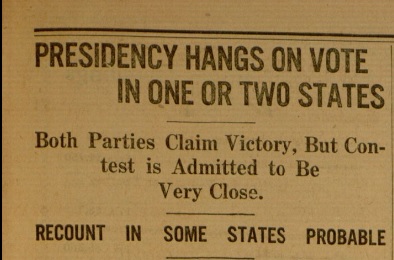 Norristown did have a Democratic paper, The Daily Register. It was just as strong in its support of Wilson as the Herald was of Hughes. It endorsed Wilson early and promoted Democratic rallies. The Register is a little more fun than the Herald because it has political cartoons, which were absent from the Herald. 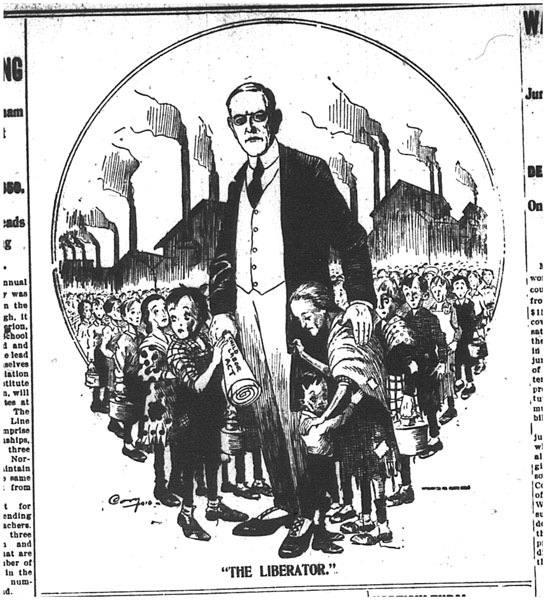 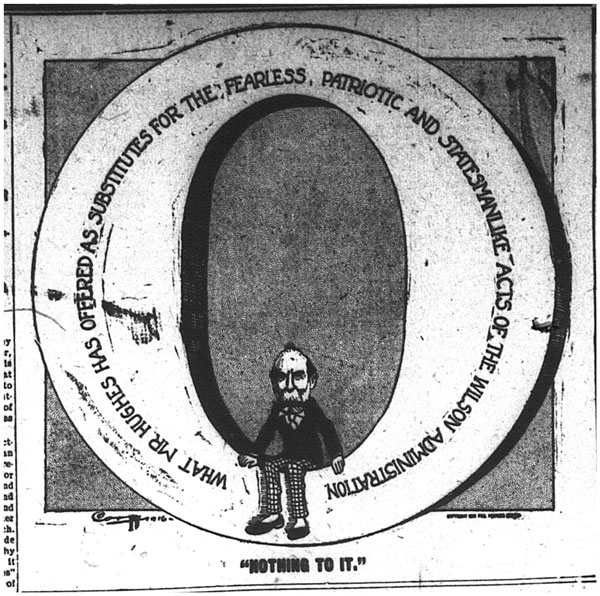 The Register declared Wilson the victor right away and reiterated the claim with more evidence in the following days. 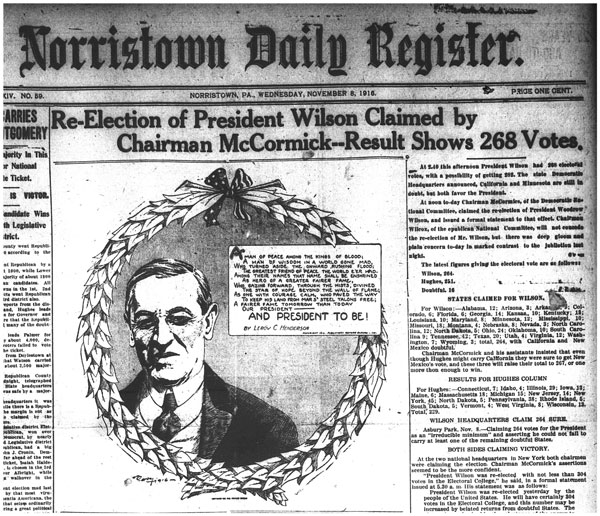 It ran this odd cartoon later in the week. 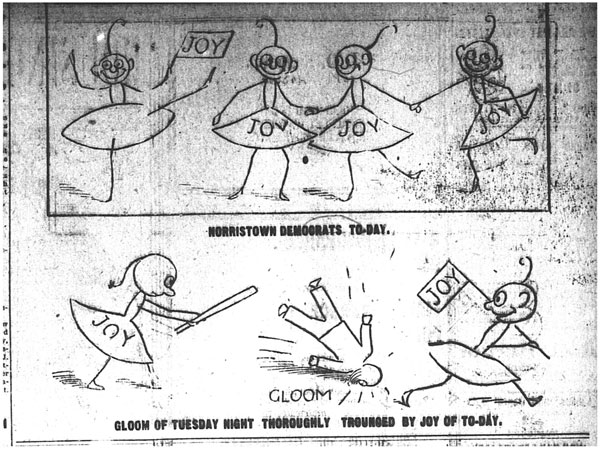 Losing the election wasn’t the end for Charles E. Hughes. He had resigned from the Supreme Court when he accepted his party’s nomination, so after the election he returned to private practice. He served as Secretary of State under Harding, and in 1930, President Hoover appointed him Chief Justice of the Supreme Court.

More in this category: « G. W. Stein The Audubon Schools »
back to top