"Hill-Billies" at the Norris Theater

This week we received two items that had me nostalgic for … February. They were handbills for local theaters. Remember theater? Remember going out and doing things?

The first handbill is from about 1931, when the Norris Theater was less than a year old and showed both live vaudeville acts and movies. Both shows illustrate trends in American entertainment in the early 1930’s. The first is hillbilly music, a phrase coined in the 1920’s for what we now might call bluegrass, folk, or Americana. Groups like the Blue Ridge Ramblers toured the country on the vaudeville circuit and recorded 78rpm records. They played traditional songs like “She’ll Be Coming ‘Round the Mountain” and “Golden Slippers.” Radio shows also featured groups like this, as the advertisement points out at the bottom, “You’ve heard these Hill-Billies on the air – now see and hear them in person.”

The show is combined with the movie, Svengali, starring Hollywood megastar John Barrymore. Svengali was a horror movie about a singing teacher who hypnotizes a tone deaf milkmaid (people’s idea of “scary” has changed). Horror was a popular genre in the early sound days of film. Universal Studio’s monster movies are probably the best remembered examples. Svengali was released in May of 1931. 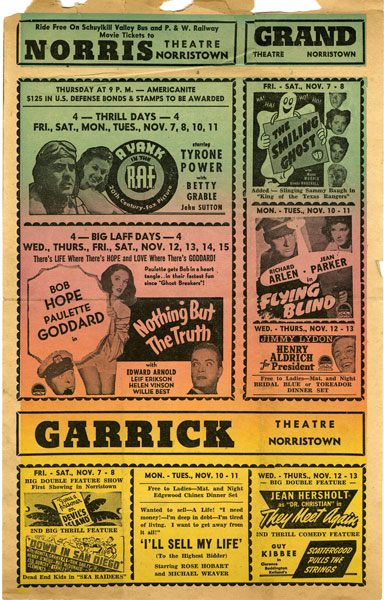 The other handbill is from 10 years later and features Norristown’s three theaters: the Norris, the Grand, and the Garrick. The three theaters were all owned by the same family so they advertised together. The Norris still seems to be the premier theater, showing the biggest movies, in this case A Yank in the RAF with Tyrone Power and Nothing but the Truth with Bob Hope and Paulette Goddard. The other two theaters show “B” movies, like The Smiling Ghost, an example of the horror comedies popular in the 1940’s.

Hopefully we’ll all be back in theaters someday soon whether it’s for a movie or clog dancers or whatever “Spark Plug – the 16 year old boy wonder” is. If you’re curious to hear what the Ramblers sounded like, you can hear some of their songs here.