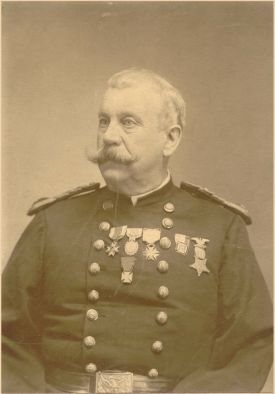 Louis Wernag Read was born in 1828 in Upper Merion. He attended Tremount Seminary before going to medical school at the University of Pennsylvania. He got his first military experience in the Crimean War (1853-1856), in the Russian medical corps. He was a doctor in the Pennsylvania militia until June 1861, when he became a surgeon in the US Volunteers. In 1863, he accepted a position as the medical director of the Pennsylvania Reserve Corps, where he introduced more modern sanitary policies. Also in 1863, Dr. Read removed the bullet that had wounded Hancock at Gettysburg after several doctors had failed.
After the war, Read was involved in the establishment of the County Hospital for the Insane. He was also involved in many civic organizations including the Historical Society of Pennsylvania, the Sons of the Revolution, and the Union League. He remained active in the local community until his death in 1900.