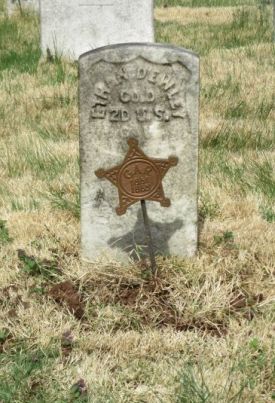 Ethan Dewley was born in Newark, NJ around 1825. Not much is known about him until he joined the army on October 25, 1852 around the age of 27.  He may have lived in Easton, PA and worked as a showemaker before joining the army.

Prior to the Civil War in 1860, he was stationed out west at Fort Laramie in Wyoming. When the war broke out he served as a private with Troop D, 2nd Regiment of the US Calvary (“2nd Dragoons”).

Ethan served with the Union Army for nearly the duration of the war, eventually being promoted to Sergeant. His unit fought in major battles from Manassas, Antietam, and Fredericksburg, to Gettysburg, the Wilderness, Spotsylvania, Cold Harbor, and Petersburg. However, Ethan did not see then end of the war. While on furlough in March of 1865, Ethan made his way to Norristown where he died in a tavern on March 31, 1865. Ethan is now buried in Historic Montgomery County where his tombstone in the GAR plot was graciously donated in 1879 by D. W. Whitney of Lycoming.