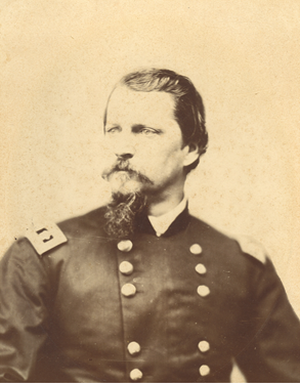 Winfield Scott Hancock was born in Montgomery Square (the house is still standing in Montgomeryville). He graduated from West Point in 1844, eighteenth in his class.

After serving in the Mexican War, he was stationed in Florida, Utah, and California. He was promoted to Brigadier General when the Civil War began in 1861. He commanded troops at many battles including Fredericksburg, Chancellorsville, and most notably Gettysburg, where he was severely wounded by a bullet to the leg. The bullet was removed by Dr. Louis Read, and Hancock was able to return to service, seeing action at Petersburg. He ended the war a Major General.

Immediately after the war, Hancock oversaw the execution of John Wilkes Booth’s co-conspirators. Hancock spent the Reconstruction period in various military posts. In 1880, he ran for President on the Democratic ticket, but lost to James Garfield. Interestingly, Montgomery County was largely Republican at the time, and Hancock did not win the presidential vote here in his home county. He returned to the military after the election, and died at Governor’s Island, New York.