Adam J. Slemmer was born on January 24, 1829. He attended Norristown Public Schools and became a druggist in his brother’s store. In 1846, he became a cadet at West Point and graduated 12th in his class. He served a role in the campaign against the Seminole Indians in Florida and also spent four years in frontier service in California. After he returned from California, he became a 2nd Lieutenant and an assistant professor of ethics, English, and mathematics at West Point. 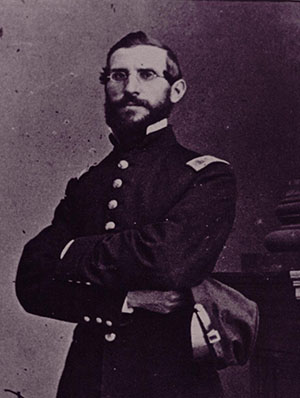 At the start of the war, he held command in Florida. He was ordered to hold Fort Pickens, which was under Union control in a Confederate state. Florida wanted the fort for the Confederacy. He was asked to surrender peacefully, yet he refused to do so even though he had less than 100 men to protect the fort with and very few provisions. He said that he was ordered by the United States to hold the fort and that he was going to do so. He held the fort successfully and was awarded a bronze medal by New York. Also for holding the fort, he was promoted to Major of the 17th Infantry. He was later promoted to Brigadier General of the United Stated army by direct command of President Lincoln. In 1862, he was severely wounded at Stone River. This wound prevented him from field service for the rest of the war. Following the war, he was sent to Fort Laramie, where he died on October 6, 1868.