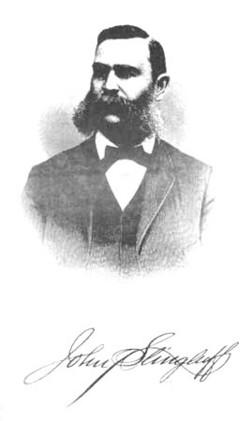 John Slingluff (1838-1899) was born in Norristown and attended Rev. George Dering Wolf's Elmwood Institute. He apprenticed as a civil engineer at the age of 16, but eventually came to work at the Bank of Montgomery County where his father worked. He succeeded his father as president of the bank in 1875. He was the superintendent of both the Norristown Water Company, and the Gas Company. He was also treasurer of the Montgomery Cemetery Company. He sat on the board of directors for most on Montgomery County's railroads and Norristown's insurance companies. Slingluff was also president of the Montgomery Hose and Steam Fire Engine Company. He was a private in Company E of the 34th Regiment Emergency Militia. He died in the Exeter train wreck which occurred when a train carrying passengers from Harrisburg to Philadelphia rammed an excursion train of Norristown citizens returning from the state capitol after the dedication of a statue in honor of former Governor and Brigadier General John Frederick Hartranft. He was the husband of Wilhelmina Gilbert.