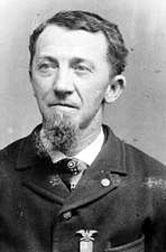 Isaac was born on August 26, 1841. He fought with the 51st PA Volunteers during the Civil War. When he mustered out on July 27, 1865, he was a sergeant. Later in life, he was a boilermaker. After the war, Hartranft looked after him and got him a job at what is now called the State Hospital as a fireman. During the National Centennial he served as a fireman for Machinery Hall. When in 1899 a statue of Hartranft was dedicated in Harrisburg, many of his former soldiers and Norristown finest took the train to be a part of the festivities. Returning from Harrisburg on May 13, 1899, there was a terrible accident at Exeter, which is just outside of Reading and 16 Norristown residents lost their lives, including Isaac. He died from his injuries at Reading Hospital.