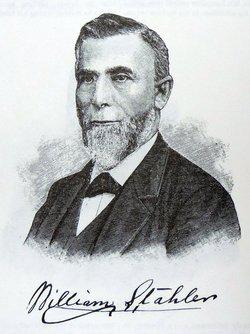 William was born in Lehigh County in 1826. For reasons that are unclear, his father was not around, and at age 13 moved to Philadelphia to live with an uncle. In 1845, he became a clerk in the drug store of Jenks & Ogden and remained there until 1854. During that time, he became proficient in chemistry and other branches of the business. He then moved to Norristown for 18 months where he opened a drug business with Amos Bertolet. In 1856, he became to sole owner of the drug establishment. In 1876, he established “The Central Drug Store” at the corner of Main and Swede Streets. His home was located on DeKalb Street below Airy. Later, he became the director of the Montgomery National Bank, the Norristown Insurance Trust, and the Safe Deposit Company. He was a member of the Masons and of Trinity Evangelical Lutheran Church. He died in the Exeter Train Wreck. According to the Philadelphia Inquirer, numerous checks and notes were found on his body.